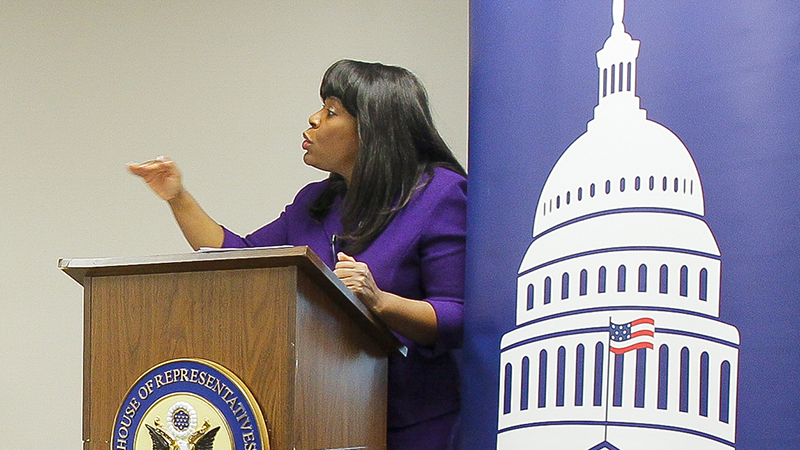 Congresswoman Terri Sewell held a community forum on healthcare Friday afternoon to get ideas from constituents to take back to Washington when Congress discusses possibly repealing the Affordable Care Act and replacing it with something else.

Friday’s meeting at Vaughan Regional Medical Center was the fourth in a series of meeting Sewell has held on her “Protect Our Healthcare” tour.

“I think that the best way for me to represent the constituents of the 7th Congressional District is to listen to them, to understand what their concerns and issues are, what they want me to be able to tell Washington when I go back. The only way to do that is to have an open and honest dialogue.”

The forum covered the Affordable Care Act, Medicare and Medicaid and featured a panel of people in the medical profession, including Vaughan Regional Medical Center CEO David McCormack and others.

It also gave audience members a chance to ask questions.

“The one big takeaway in my opinion has been that most people are scared we’re going to have a repeal of the Affordable Care Act, while not a perfect bill, has provided access to 150,00 Alabamians, which otherwise wouldn’t have had health insurance,” Sewell said.

That concern comes because President Donald Trump ran on a platform of repealing the ACA, which is often referred to as Obamacare.

“There’s a lot of miscommunication out there, and there’s a lot of folks who really want to understand what’s going on,” Sewell said. “I think it’s a shame that we have partisan bickering over healthcare. It seems to me healthcare should be one of those fundamental rights all Americans have and we should be willing to put partisan politics aside and work for the betterment of all people.”

After listening to the panel address certain issues that could come up if the ACA is repealed, Sewell had a list of several items to take back with her to the Ways and Means Committee, which she was recently appointed to.

“My colleagues have not put forth a replacement plan, and we have got to hold people accountable. You can’t rail against the Affordable Care Act for seven to eight years, finally be in the driver’s seat and not have a replacement,” Sewell said. “It’s unacceptable, and I for one am willing to sit at the table and work towards finding a result that will work for everybody.”

Sewell said she made note of preventive care, restoring Disproportionate Share Hospital payments, equal compensation for RNs and LPNs, healthcare education in rural areas and funding, and incentivizing doctors to want to work in rural communities.