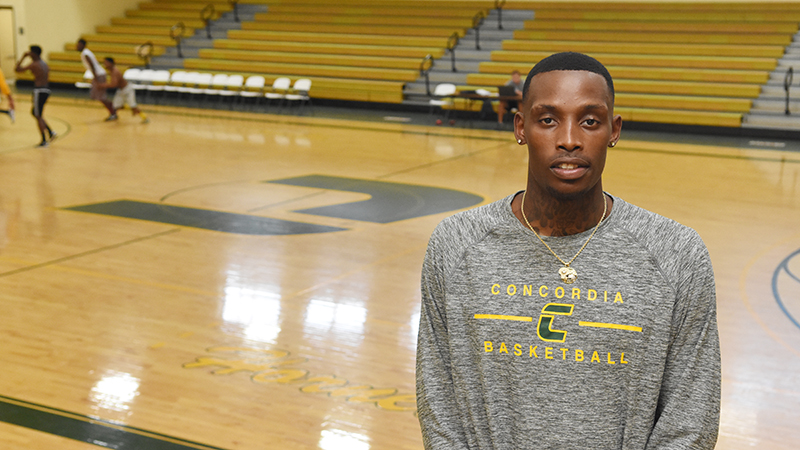 Concordia College Alabama junior Tavin Cummings poses for a photo Friday at the school’s gymnasium. Cummings and Concordia will play for the USCAA Division I National Championship this week in Pennsylvania.

If the Hornets are holding the trophy Saturday night, junior Tavin Cummings is likely to have a lot to do with it. Cummings, a Memphis, Tennessee native, transferred to Concordia before his sophomore year of college and is second on the Hornets in scoring this year.

Cummings is averaging 16.2 points per game this year and is shooting an outstanding 53.1 percent from the 3-point line, the best percentage in the USCAA.

“He provides a lot of scoring for us, rebounding and defense. He’s been to the national tournament before and the year he went, 2013-2014, we didn’t have the outcome we wanted, so I’m happy to see him have a chance to go back again. This time hopefully it’s different results,” said Concordia coach Fredrick Summers.

Cummings started his college career at Southwest Tennessee Community College in Memphis. His mom, Cheryl Fuller, played basketball and ran track when it was known as Shelby State. Cummings did the same for one year.

In 2013, he transferred to Concordia so that he could play for Summers, who he’d known his whole life.

“He’d been knowing me as a person since I was crawling,” Cummings said.

“He and my dad were best friends. When I found out he as coming down here, I said I’ll come with you. We’ve really got a closer bond.”

Due to that relationship, he knows Summers is always going to expect more out of it, but he likes the challenge.

“I know he’s going to be on me the hardest,” Cummings said. “He’s going to expect me to do everything 150 percent more than what everybody else is doing just because.”

Cummings started playing basketball at 12 years old. He decided to play basketball over football, where he played quarterback and wide receiver. A few years ago, Cummings had a wreck when a deer ran out in front of his car. He ended up running into a tree and lost consciousness for a minute. He went through months of physical therapy but didn’t have any longterm effects but still missed a season of basketball.

“All my skin was cracked up. That’s how I got all this,” Cummings said, looking at scars on his arms. “My knee hurts every now and then and gives me problems.”

He said his biggest issue was that he was stiff after the accident, but rehab and weight lifting helped him get back to his normal self. He said now he appreciates basketball more than ever.

“You get one life to live and one life to play. You want to make the best of your college,” Cummings said.

Each year Summers said he gathers his team before the season and asks them what their legacy will be.

Cummings gets a chance this next week to make sure this Concordia team is remembered in Selma for a long time. The Hornets will play Iowa Wesleyan in the first round of the tournament.

“We’ve stuck together, and we feel like our backs are against the wall,” Cummings said. “We have a target on our back … and we are going to have the mentality that nobody is getting it but us.”