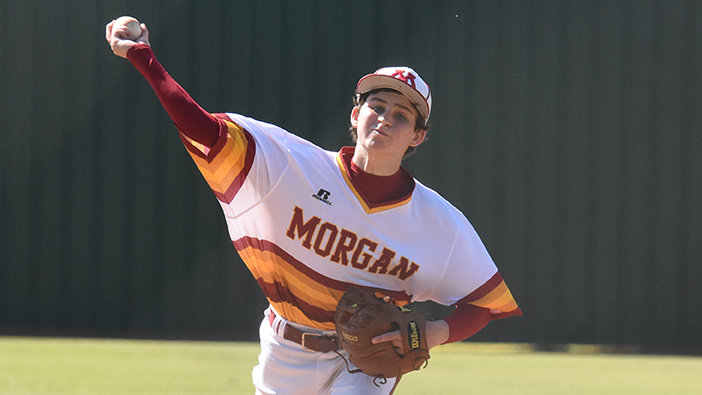 Morgan Academy’s Britton Adams throws a pitch during the sixth inning of Friday’s game against Bessemer Academy. Adams was credited with the save after securing the Senators’ 3-0 win. --Daniel Evans

Even getting up at the break of dawn and playing baseball when many people are eating breakfast didn’t faze the Morgan Academy baseball team.

The Senators downed Bessemer Academy 3-0 Friday in the first game of the Morgan Academy Baseball Tournament. It started at 9 a.m. — about seven hours before most Senators’ games will take place this year.

“These guys are very talented baseball players,” said Morgan Academy assistant coach Seth Currie. “This is probably our toughest test to date. We started off really well, our bats are really starting to light up and when you have Gunnar on the mound, it’s hard to beat him.”

Sawyer Hopkins had two RBIs in the win and Bishop Price had the other for Morgan.

Gunnar Henderson gave up two hits in five innings pitched, as the Senators moved to 7-0 on the year.

Britton Adams got credited with a save after pitching the sixth inning. Bessemer had the tying run at the plate, but Adams forced Noah Wilder to pop out to end the game.

“Out of all of our guys, we want them to throw strikes and Britton really does a good job,” Currie said. “He can really throw his curveball for a strike, which is very good for us.”

The tournament included 14 baseball teams from around the state and took place at Bloch Park and Morgan Academy.

The Senators played one of the tournament’s first two games, but had a long wait until their second contest of the day. The Senators were set to take on Monroe Academy at 7 p.m. in the final game at Morgan Academy.

Currie said the Senators were going to stay out of the sun and relax as much as possible while getting ready for game two.

“We’re going to have them back out here to help with the field, but we are going to open the classroom up,” Currie said.

Morgan is also scheduled to play Southern Academy at 3 p.m. on Saturday at Bloch Park.