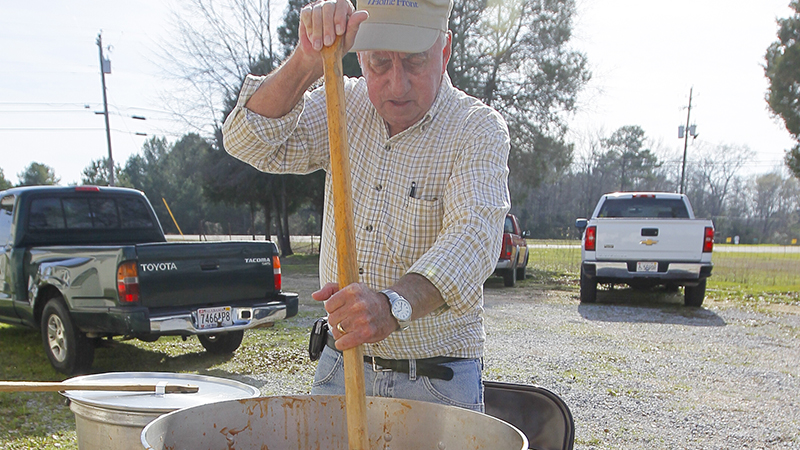 Monday afternoon members of American Legion Thomas R. Mackin Post 20 in Selma finished cooking the first of many batches of Brunswick stew they will cook this week for the post’s bi-annual stew sale.

Between Monday and Saturday, Charlie Friday, post commander and stewmeister, said they will cook nearly 800 quarts of Brunswick stew to raise money for the post’s community projects.

“It’s a benefit more than anything else because we use the money to support scholarships to youth to go to Boys and Girl’s State at the University of Alabama, we support three different little league ball teams and we provide flags to all the schools in Selma,” Friday said.

Friday said the sale started about 30 years ago, and for the most part, the post still uses the original recipe that was created by one of its members.

“We’re trying to use his recipe,” Friday said. “We’ve modified it a smidgeon, but it is just virtually unchanged from the way he was doing it.”

Chicken, pork, corn, potatoes and tomatoes are just a few of the ingredients. The rest is a secret, but Friday said people continue to come out each time they have the sale to support the post.

“Our only problem is that we can’t get it cupped up fast enough,” he laughed. “They’ll be cruising through here picking it up here in a few hours now, so we’ve got to get it cooled down, in the cups and ready to go out the door.”

The stew is $9 per quart or $34 per gallon and will be sold until Saturday. That is unless they run out before then.

“At our last sale, by the time we got this in the cups ready to deliver, it was gone,” Friday said. “We put none in the refrigerator or freezer last time.”

Friday said it’s a sure sign that people in Selma and Dallas County like their stew and want to support their veterans.

“The support that the city and county have given us is just fantastic,” he said. “They’ve really supported us in our effort. It’s nice to know that the community supports their veterans. That’s the big thing.”

James Cobb, who has been a member of Post 20 for 22 years, cleans the stew pots, but he also goes out taking orders.

“It’s one thing to make it,” he laughed, “but somebody’s got to get out and sell it.”

He said he’s got a route he takes stopping by different offices to take orders.

Fraternity gives back to community