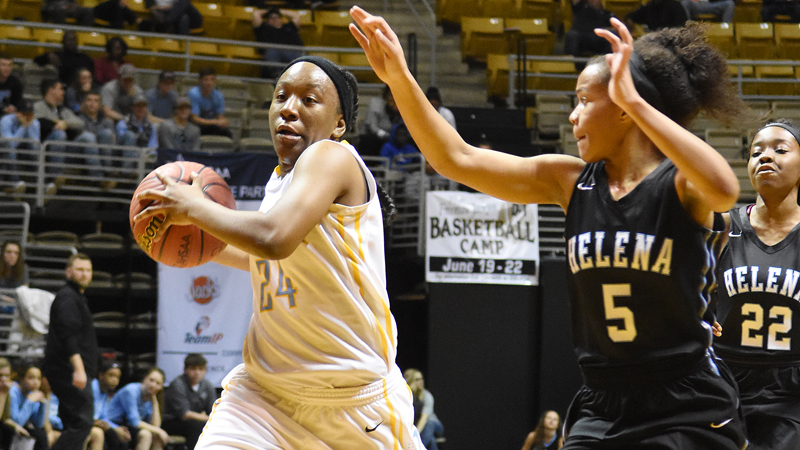 Selma's Jacquetta Dailey races down the court while being guarded by Helena's Morgan Watkins. --Daniel Evans

After a slow start, Selma went back to its strength to defeat Helena in the Central Regional semifinal Friday at Alabama State University.

The Saints used a full court press to force the Huskies into 23 turnovers — most of them in the second half — as they pulled away for a 58-38 victory. Selma had trailed by as many as seven points in the first half and was down 23-22 at halftime.

“We are used to running,” Harris said. “I’m not going to lie. I had to get on them a little bit.”

Harris said he had to fire up his team at halftime and whatever the message was worked in a big way. Junior Kynadra Lewis started the second half with a 7-0 run of her own to put the Saints ahead for good. Lewis finished the game with a team high 22 points and she was also credited with two steals.

“We were aggressive in the second half on defense,” Lewis said. “We know what we’re capable of. We know when we make a team turn the ball over and we get free layups, we’re in the zone.”

The first half was a bit sloppy at times. Helena led 16-9 in the first quarter after a 3-pointer by Brandis Lang. Jamya Smith made a deep two-pointer and a transition 3-pointer in the second quarter to bring the Saints within 21-18.

Selma took its first lead after back-to-back buckets by Dailey, but it was shortlived. Jennifer Brown, who scored 12 points, made a basket late in the first half to put Helena up one at the break.

“They know how to stay in a basketball game,” Harris said.

Selma started the second half by speeding up the tempo and the Saints looked more comfortable.

“In the first half, we limited the transition points, executed on offense, second half we turned the ball over, did not run our offense and let them get out in transition a lot more,” said Helena coach Alan Skinner.

The Saints will take on Hillcrest-Tuscaloosa, which beat Opelika 59-39 Friday, in the Central Regional final Tuesday at 12:30 p.m.