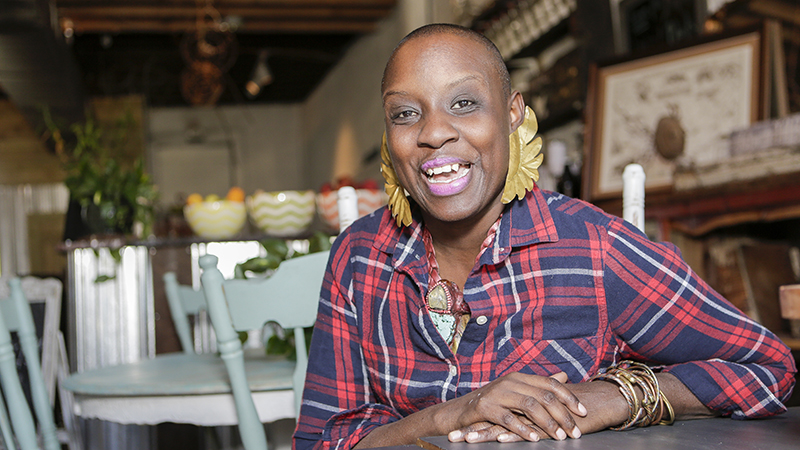 Organpi Farmhouse began as an idea that Dr. Assata Ma’at-Diagne had to bring the community together in a different fashion than most restaurants. The idea was to be a place of healing, healthy eating and a promotion of local goods.

After a year and a half of putting in long hours of manual labor, Diagne and her husband, Khalifam, along with friends, have turned her idea into a reality.

“When we came in here, this building was basically a waterfall. We had no floors, no ceilings, no roof. So it’s very exciting to see it actually come to fruition,” Diagne said. “It has evolved not only into a farm market but into a place that people can come and sit down to eat. It has evolved to a place to reserve meetings and more.”

Organpi serves all organic and local produce and meats, but it also operates as a store.

Diagne said having the additional grocery was important to her to be able to not only offer people healthy options but to also do more to support local farmers like herself.

“I’m a doctor turned farmer, I was born and raised in Selma,” she said. “It’s exciting to me as a farmer that’s building a farming network, to be able to service farmers on a small scale. My vision was to create a place where people could have access to fresh food. I had no idea it would evolve to this.”

Organpi isn’t officially open yet, but they have opened the doors for a couple Fridays to give the community a sample of what the full-time operation will be.

“The most exciting thing to me has been, the two Fridays that we have been open, we’ve ran out of food,” Diagne said. “It was just very exciting to see that people definitely want that.”

The menu at Organpi is ever changing, but some things Diagne said will be a staple of the restaurant, like bison, chicken kabobs and salmon.

Other things, like lima bean coconut stew will be on the menu on occasion.

“Our menu is consistently changing. What we have from one day to the next changes,” Diagne said. “It gives us an opportunity to spotlight local farmers.”

Diagne said her love of the city is a reason she decided to open Organpi Farmhouse.

“I love this city and I just want to see this city do well,” Diagne said. “That’s what the Farmhouse is really all about, bringing healing to the city. I want to see the city prosper. I think this is one of the most beautiful cities in the world and when people come here, it’s very very important for us to be able to offer the best the city has to offer.”