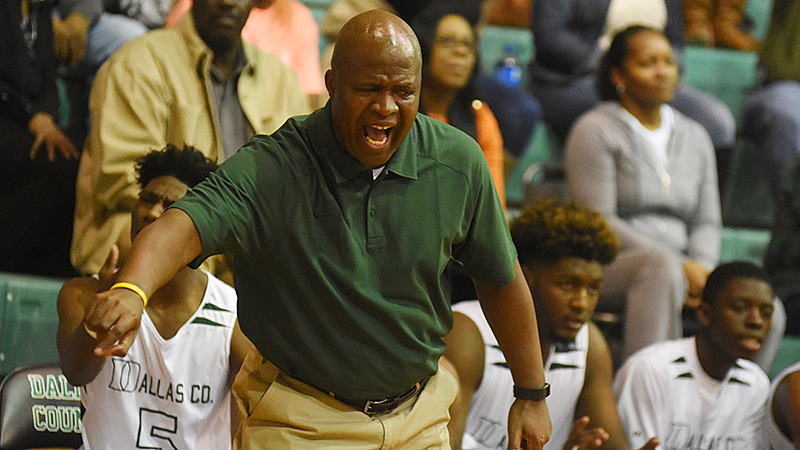 In one corner of Dallas County’s gymnasium, a banner hangs in honor of the Hornets’ 2006 area championship team. The 2006 team was Willie Moore’s first team at Dallas County and the banner serves of a reminder of the success that followed over the last decade.

On Friday night against Calera, Moore hoped to win one last area title, giving him bookend area championships, before retiring whenever the Hornets’ season ends in the next month.

However, there’d be no storybook ending Friday night — at least not for the Hornets.

Calera overwhelmed Dallas County (18-5) in a dominant 79-62 victory that at times wasn’t as close as the final score indicated.

“They came in and sort of took over our gym,” said Moore, who coached his last home basketball game for Dallas County. “Our kids came out lackadaisical, living off last Tuesday’s win. We didn’t do the little things we work on in practice to give ourselves a chance to win.”

Dallas County actually led 20-12 after the first quarter, but Calera dominated the remaining three quarters. The Eagles started the second quarter on an 8-0 run, stole the momentum and raced in front. Clifton Smith’s 23 points led the way.

“I feel like if my guards are better than yours, we will have a chance to win, but tonight their point guard play was superb,” Moore said of Smith. “He was the best player on the floor.”

The Hornets were outscored 45-20 in the second and third quarters as Calera took control. The teams had split regular season meetings this year and Dallas County had won the area on a coin flip tiebreaker.

“Our guys, they had a chip on their shoulder and we preach every day defensive intensity and when we can come out here and pressure people and get stops and rebounds, we’re hard to beat,” said Calera coach George Drake.

Calera actually showed up late to the game and received a technical foul. Mario Simmons knocked down one of the two free throws to give the Hornets a 1-0 lead. The opening quarter was back and forth until the final minute when Kendall Thomas knocked down back to back 3-pointers to put Dallas County up 20-12.

Calera took a 26-24 lead on Smith’s wide open 3-pointer in the second quarter — his second in as many possessions — and the Eagles didn’t trail again.

The Eagles led by as many as 22 points in what turned into a one-sided second half.

“I want to win for the kids. Today instead of watching a movie, we watched the 2014 state championship game. That’s what we watched before the game,” Moore said. “We showed the guys what really good team defense looks like, how you’re supposed to box somebody out and how it looks on film. We were trying to encourage them that this is the time for us to get on a run.”

The Hornets still have time. They’ll play at Central Tuscaloosa Tuesday in the sub-regional round of the playoffs. Calera will host Sumter Central.