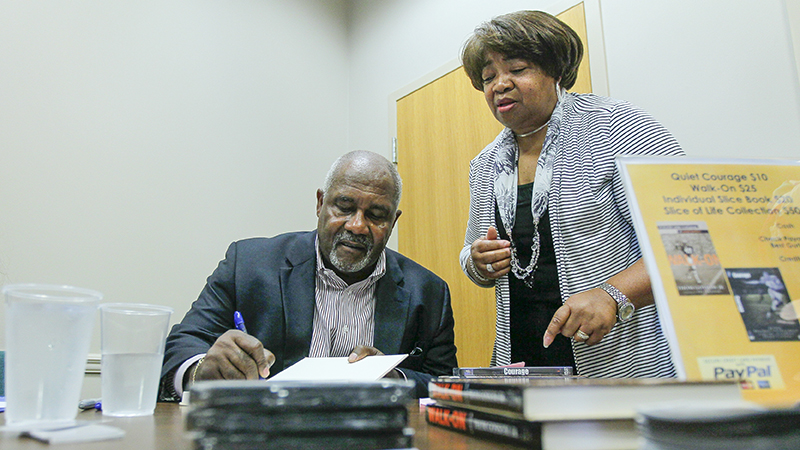 Thom Gossom signs a copy of his book Thursday during the Lunch at the Library program.

Thom Gossom Jr., the first African American athlete to graduate from Auburn University, shared some of his life story Thursday with a room full of people at the Selma and Dallas County Public Library.

Gossom talked about integration and how he became an actor and eventually an ambassador at Auburn for Lunch at the Library.

“I look on it as a gift that I can share,” Gossom said.

Gossom started his football career as an Auburn Tiger as a walk-on but earned a scholarship and a starting position his last three years on the Plains.

“There were some guys that tried to run me off, but I wasn’t going anywhere,” Gossom said. “Once I got to be a starter … nobody was taking my job.”

Gossom, who was the starting wide receiver from 1972 to 1974, played for legendary Auburn coach Ralph “Shug” Jordan. He was a part of the team 1972 team, which was nicknamed “The Amazings.” He later wrote a book about it titled “Walk-On.”

“In the late sixties and the 1970s, Auburn like quite a few southern universities was going through integration. My story is a small part of that integration effort,” Gossom said.

Gossom said there was a player on the team that he didn’t get along with, but that night they shared a hug that changed him.

“He hugged me, and I hugged him back, and all that junk just kind of went out of me,” Gossom said. “I can’t say we were ever close-close, but we became friends. He was sick in the hospital, and I sent him a note that said I loved him, and he sent me a letter back and told me he loved me. It was a life-changing experience.”

Gossom said he hopes his story can serve as motivation for others going through a tough time.

“When you play football on that level, it takes everything you have to play,” Gossom said. “Everybody wants to quit at some point in time. Saturday is the fun part. The rest of it is work, but it teaches you.”

Gossom signed autographs and took photos with people that attended the program after speaking.

Becky Nichols, library director, said the next Lunch at the Library will feature Alston Fitts, who recently finished Selma’s bicentennial history, on March 16.