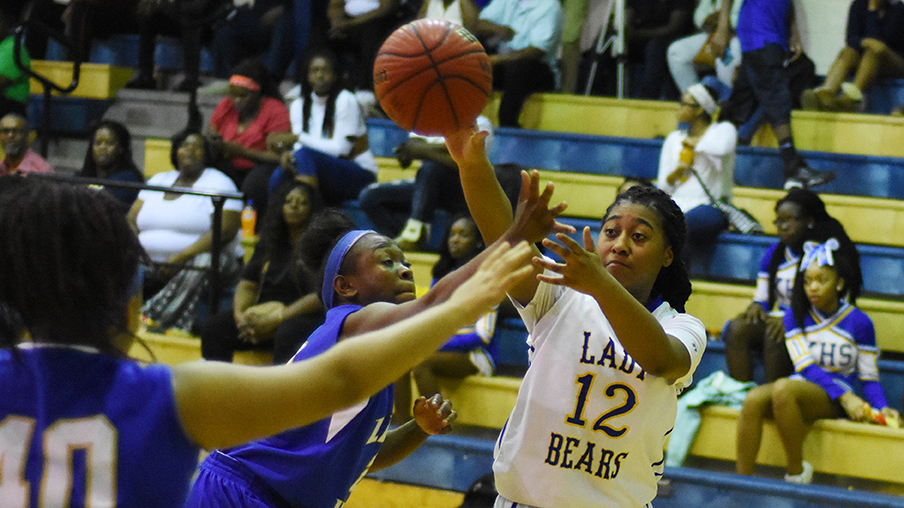 ORRVILLE — This season’s Keith basketball team may not have the firepower or experience that previous Bears’ teams have had, but they sure play tough.

Keith (10-12) held off Aliceville Wednesday for a 38-28 win in the first round of the class 2A, area 7 tournament. The win means the Bears will play R.C. Hatch Friday for the area title and they’ll also move on to the sub-regional round of the playoffs.

Keith coach Cecil Williams said it’s the sixth year in a row the Bears will be in the sub-regional portion of the playoffs.

“We’ve been scrapping, we’ve scrapped through this year,” Williams said. “It was the same thing tonight. We’d played Aliceville before and it was the same situation. We were tough enough, we stuck it out and held on to the end.”

Keith led from start to finish, but Aliceville pulled within 20-18 late in the third quarter. The Bears answered by getting the ball to Shatavia Moore, who made a shot through contact to put Keith up by four. Jakyra Simmons made a layup on the next possession to extend Keith’s lead to 24-18.

At the start of the fourth quarter, Keith still led by six when Simmons knocked down one of the biggest shots of the game. She made a 3-pointer with 5:30 left that extended Keith’s lead to 31-22. A free throw made the lead 10 and Keith led by that margin or more the rest of the way.

“Her confidence is starting to build,” Williams said of Simmons.

Moore had 12 points and Simmons scored 11 to lead the Bears. Simmons made two 3-pointers in the first quarter to put Keith ahead 9-5 after one. The Bears held Aliceville scoreless until the last second of the second quarter, when a steal turned into a Yellow Jackets’ layup. Aliceville’s Zikia Bonner made two 3-pointers in the third quarter during an 8-0 run that pulled the Yellow Jackets within two.

The Bears finished the quarter on an 8-2 run to take control and to move on to the championship game.

Keith won both of its meetings against R.C. Hatch this year. If the Bears can do it again Friday, they’ll host the sub-regional portion of the playoffs in Orrville.  Friday’s game is at 6 p.m. in Orrville.