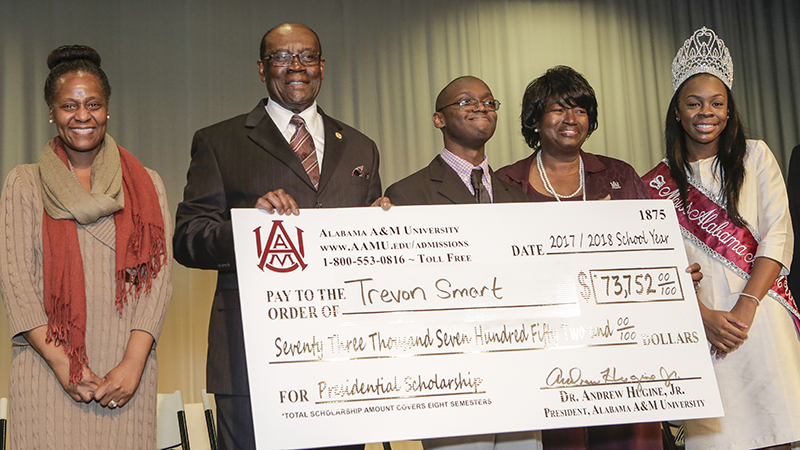 The Alabama A&M University president’s bus made a stop in Selma on Tuesday as part of the school’s annual bus tour. It’s the fourth time the bus has stopped in Selma to present area students with scholarships to the university.

The first stop was Southside High School, where students from Keith were also in attendance, followed by Selma High School.

“It is priceless [to see the student’s faces]. That represents for the young people, … an opportunity to achieve their dreams.”

Hugine said the tour, which started Monday and will end Friday, covers more than 15 cities and more than 50 high schools.

Two of those students at Selma received full ride scholarships, paying for everything from tuition to room and board and even books.

“It’s extremely exciting to see the hard work I put in to high school finally being paid off. It gives me a chance to go to college for free, which was a big must-have for me,” said Kenneth Grimes, who received one of the full-rides. “I thank God that he made a way for me. I’m extremely excited [for college]. I’m ready to meet new people, ready to get into my profession and what I want to do in life.”

Grimes plans to double major in political science and business administration and one day hopes to open his own business and eventually work his way up in politics.

“I plan to work and start up a company … and I want to hopefully climb the ladder of government going from probably mayor to governor to senator and all the way to president hopefully,” Grimes said. “I just want to thank my family and God for all the love and trust that they put in to me.”

Tre’Von Smart was the other Selma student to receive the $73,752 scholarship to A&M.

Smart has plans to major in computer science and mechanical engineering.

“It’s really exciting that my effort pays off and that I get to go so easily to a college of my dreams,” Smart said. “I’m very thankful for this opportunity. I want to thank God and my family and friends for always supporting me.”

Wanda Young-Lowe, senior counselor at Selma High, said she is proud of the students and their accomplishments.

“It’s very exciting. This is the fourth year straight that we’ve made the president’s bus tour, and we’re excited that they think about our kids, that they want to come in and help us and help them meet their post-secondary goals,” Young-Lowe said.

“We’re just thankful and grateful that we have an opportunity to help the students with scholarships because tuition is rising. Because of that, everybody needs a little help. If the kids have come to school every day and they have made the grades and they have stayed out of trouble, then they should be rewarded.”

Young-Lowe said she is especially happy that Alabama A&M decided to give a variety of students scholarships.