Rain likely to impact the area on Tuesday, Wednesday 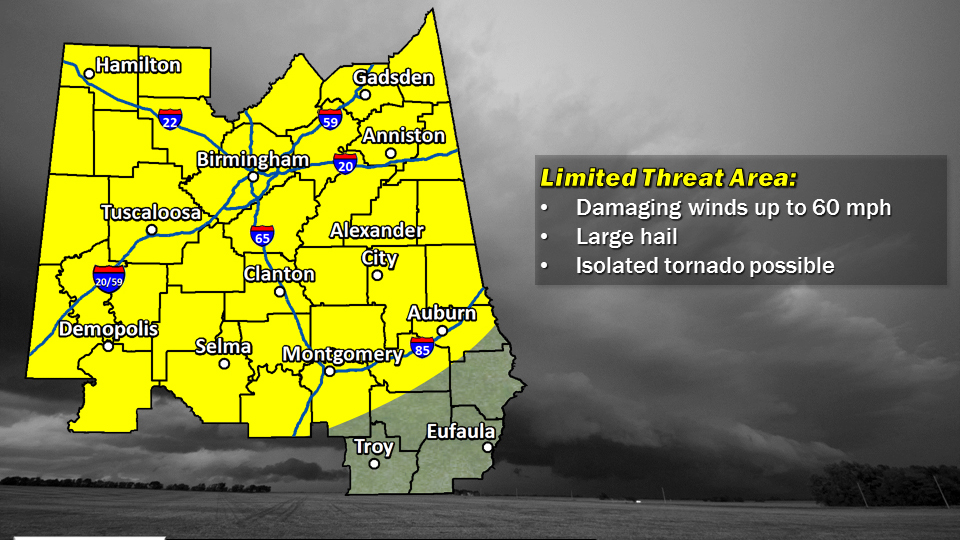 Severe weather is possible for parts of central Alabama on both Tuesday and Wednesday. Damaging winds up to 60 miles per hour, large hail and isolated tornadoes are possible. --National Weather Service in Birmingham

Selma and Dallas County could be in for a couple of stormy days.

Dallas and the surrounding counties, along with much of central Alabama, are in a limited threat area for severe weather Tuesday and Wednesday.

According to Jim Westland, a meteorologist with the National Weather Service in Birmingham, the first round of storms is expected to move into the area around 3 p.m. and hang around until 8 p.m.

“Tuesday’s severe weather threat is going to be mainly an upper level disturbance,” Westland said. “With a lot of low level moisture creating unstable conditions, when this disturbance moves across it could kick off some thunderstorms, and some of those could be severe.”

Tuesday’s storm could bring damaging winds, hail and even a tornado.

“The threat is fairly limited. We’re not expecting a big outbreak of severe weather or tornadoes or anything like that,” Westland said. “People just need to keep a source of weather information in case we have to issue any warnings.”

Westland said a tornado can’t be ruled out, but it is something the National Weather Service has to be cautious of.

Wednesday’s storm should be somewhat similar to Tuesday’s.

“We also do have another severe weather threat on Wednesday, and that will be kind of a similar timing of afternoon and evening,” Westland said.

“That threat will be caused by a cold front that is moving into the area.”

Westland said less rain is expected with the second round of storms, and a tornado is also less likely to happen.

“We’re looking at mainly a damaging wind threat. The tornado threat is low enough that we’re really not mentioning that at this time,” Westland said. “We’ll have damaging winds up to about 60 miles per hour, and large hail is also possible.”

Between the two storms, Westland said this area should see around a half-inch of rain.

“I wouldn’t characterize it as a lot of rainfall, but if you end up under one of these stronger thunderstorms, you could get a quick half-inch to an inch of rain, but I think on an average we’ll see less than a half-inch of rain total between the two systems,” he said.

Once the storms move out, Westland said temperatures should drop to what they normally are around this time of the year, into the 30s.

“By Thursday morning temperatures will be down around 50 degrees, and then by Friday morning the cold air really starts to settle in, and we’ll get back down into the 30s, which is more typical for this time of year,” he said.

Celebrities Only Salon reopens after renovations