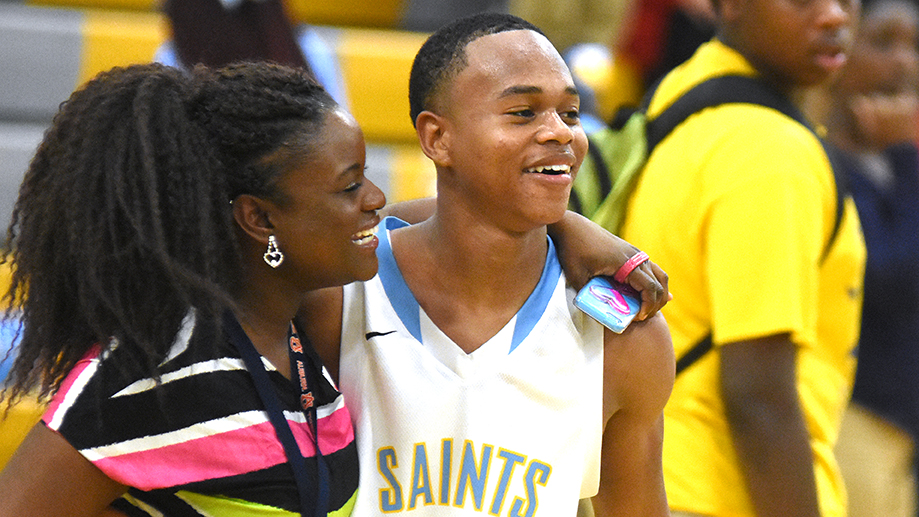 James Anderson is congratulated after the game. Anderson made two buzzer beating 3-pointers to send the game to overtime and double overtime. --Daniel Evans

Selma’s six seniors played important roles in the Saints’ win over Central Tuscaloosa Thursday on senior night, but it was junior James Anderson that stole the show.

Anderson hit two 3-pointers to beat the buzzer— one at the end of regulation and one in overtime —to tie the game. He finished the night with 11 points, but hit the two biggest shots of the night to keep Selma (14-10) in the game. The Saints closed it out in double overtime for a 73-67 victory in a wild regular season finale at Selma High School.

“That’s the closest I’ve been to a heart attack,” said Selma coach Ronald Lane with a smile.

Selma trailed 55-52 with 15 seconds remaining in regulation. On the game tying play, the ball was ricocheted around several times and got knocked near mid court. Anderson scrapped for the ball, dribbled twice and launched a deep 3-pointer that found the bottom of the net and sent the Selma bench and crowd into a frenzy.

“I wasn’t thinking. I just shot it,” Anderson said.

In overtime, Selma again found itself trailing. The Falcons led 61-57 with 2:09 left, only to watch the Saints rally again. Ja’Mere Abrams made a 3-pointer and layup on back to back possessions to bring Selma within 63-62.

Central’s Ky’Andre Jackson made two free throws to extend the Falcons lead to 65-62. The Saints answered by going to Anderson one more time. Jeffery Huff Jr. threw the ball to Anderson near the top of the key and he knocked down a 3-pointer, which bounced off the backboard and through the rim. The shot tied the game at 65-65 and sent it to a second overtime.

“It didn’t go necessarily the way it was drawn up, but players make plays and he made a couple of big time plays,” Lane said.

Senior Ivan Williams, wearing a mask after breaking his nose against Southside, made a free throw to put Selma up at the beginning of the period and the Saints didn’t trail again. Huff added a layup to put Selma up 70-67.

With 37.2 seconds, Anderson beat a defender near the baseline and laid the ball up to put Selma ahead 70-67.

Central had only one possession to try to tie and the Falcons lone shot attempt appeared to be a deep two, and it missed badly.

Korbyn Kelly made a free throw and Huff knocked in two other freebies as the Saints held on for a six-point win.

“This game takes us right into the playoffs because it gets us ready for any test we have,” said Selma senior Kevin Jones.

All of the Saints’ seniors — Jones, Huff, Williams, Tommie Moore, Jalen Garner and Jacquez Wright — were honored at halftime of the boys’ game.

“What [this win] says is you have a great group of seniors,” Lane said. “Guys that play a lot, guys that don’t get a lot of playing time and don’t complain, just great team players when their name is called they go out there and give it all they’ve got whether it’s practice or a game.”

The win gives Selma some momentum going into the class 6A, area 5 tournament, which will start Tuesday at Stanhope Elmore. The Saints will play Chilton County in the first round of the tournament, which is an elimination game.