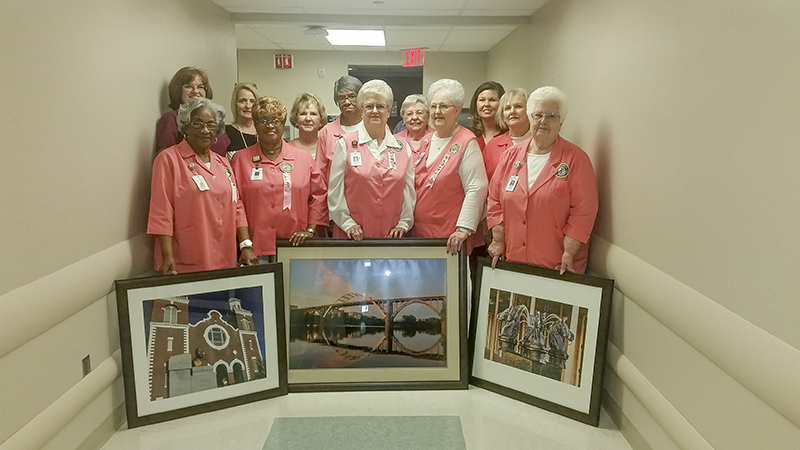 Local art now hangs in Vaughan Regional Medical Center’s radiology department thanks to help from a local artist and the hospital’s auxiliary.

The walls of the radiology department at Vaughan Regional Medical Center got a makeover Wednesday with help from a local artist and the hospital’s auxiliary.

Now, instead of bare walls, patients, doctors and nurses will see photographs of different places around Selma.

“Patients that come in there, they could be in there for an hour or so, so with it being nice fresh walls, we just wanted something different as far as artwork,” said Torrie Bond, director of radiology.

She said the department was renovated in late 2015, but the walls were in need of decoration, so we went to the hospital’s auxiliary with the idea.

“That’s what we’re here for, to help the hospital and to spruce the hospital up if we can,” said auxiliary president Martha Plummer.

Bond said she got the idea after seeing photos that were taken by Kathy Prince, who works in the hospital lab.

“I have seen prints of hers and knew that she had some local art, so I just requested it and submitted it to see if they would take that on, and they did,” she said. “So now we’ve got some pretty art for patients to see now in the newly renovated area.”

Prince said Bond asked her for photos for the project about a year ago.

“She knew that I took pictures and asked me for some of my local pictures of some things that I’ve taken around Selma,” Prince said. “I put them all on a thumb drive and gave them to her, and I thought that was the end of it until a few weeks ago.”

Prince said it was a great feeling to see her photos enlarged, matted and frame and ready to hang up Wednesday.

“It’s very overwhelming because I’ve never seen them past four by six size,” Prince said. “It means so much to me that somebody actually wanted to do that. That’s what I’m so flattered by. I wasn’t expecting that.”

Prince said she started taking pictures after her husband, Randy, passed away.

“I was young and just wanted something to do. I needed a hobby and something to take my mind off of things,” she said. “I bought a camera because it was something you could kind of get out and do by yourself, so it’s just a hobby.”

It’s a hobby she truly enjoys.

She hopes seeing some of Selma’s iconic locations like the Edmund Pettus Bridge at sunset, Brown Chapel or the horse fountain in front of the St. James Hotel will bring a smile to people’s faces as they walk through the department.

Battle of Selma canceled after city requests $22,000 for…