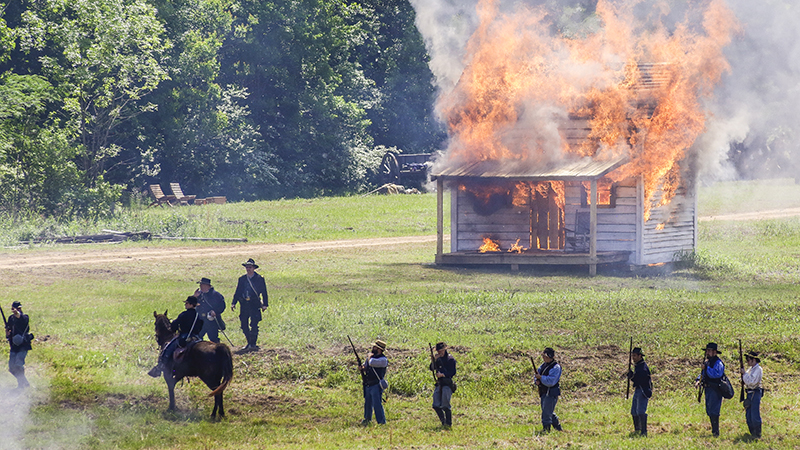 Reenactors won’t take the battlefield in April for the annual Battle of Selma due to the city of Selma’s request for the nonprofit group to pay more than $22,000 for city services.

James Hammonds, president of the society that puts on the event, said the request came from the city at short notice, which gave the society little time to do anything other than cancel the reenactment.

“We only had three months to go when we got this bombshell,” Hammonds said Wednesday.

“We’re very sorry that it came to this, and we’re disappointing a lot of people by doing it. I only hope that the city will show enough support for the battle and maybe enough people with influence on the mayor can go to him and tell him it is actually a good economic thing for the city.”

The letter, signed by Mayor Darrio Melton’s Chief of Staff Ollie Davidson, said, “Thank you for your service request. Unfortunately, due to down economic times the [city] can no longer give in kind services.”

The release from the April 1865 Society said the city did not charge them for services in the past.

“We can’t continue to put taxpayers on the hook for the full cost of these events, which causes a hemorrhaging of our budget,” Melton said.

“We want all events to operate, but across the board we are not going to use taxpayers’ money to subsidize private events, and that’s our policy moving forward. We’ve got to be responsible stewards of the resources the taxpayers are giving to us.”

Melton said all events that request city services will be expected to pay for the service provided by the city.

“We really didn’t have anybody that we could go back to and negotiate with because quite frankly we never got the mayor on the phone after then,” Hammonds said.

“Ms. Skelton (Battle of Selma Chairman) tried many times to get him on the phone, get him on an email, get him where we could sit down and discuss it with him, and we had no response, except from his chief of staff.”

Melton said he had only met Hammonds one time.

The Battle of Selma wasn’t the only big event coming up in Selma. The 152nd Bridge Crossing Jubilee is scheduled for the first week in March. Faya Toure Sanders, Jubilee founder and event volunteer, said the city has asked the Jubilee to pay for services as well.

“They’ve been asking us to do that for years and what I’m saying is I don’t need their police protection, they can keep their police protection,” Sanders said. “As much as I dislike the Battle of Selma, the truth is it brings in tourism, and I think it is just a disservice to those institutions that are trying to grow tourism for them to charge us for police and fire protection.”

Sanders said the Nation of Islam and another private security company has committed to provide security for the Jubilee instead of paying for city services.

“We’ll have own our security forces at the Jubilee,” Sanders said.

“If there’s a crime or a suspected crime, then we’ll call the police like any other citizen, any other business. They can come and arrest anybody that has committed a crime but we don’t need them in security forces.”

Melton said the city cannot afford to cover the cost of events, and they are trying to recoup some of the money lost over the years.

“Every event in the city will be responsible for working with the city if they want such services provided,” Melton said.

“We’re willing to work and talk with event organizers, but it’s not the taxpayer’s responsibility to subsidize these events as we move forward as a city.”

The April 1865 Society is a nonprofit education organization. Hammonds said profits from the battle go to putting it on and have also helped pay for historic markers to be put up around Selma for educational purposes.