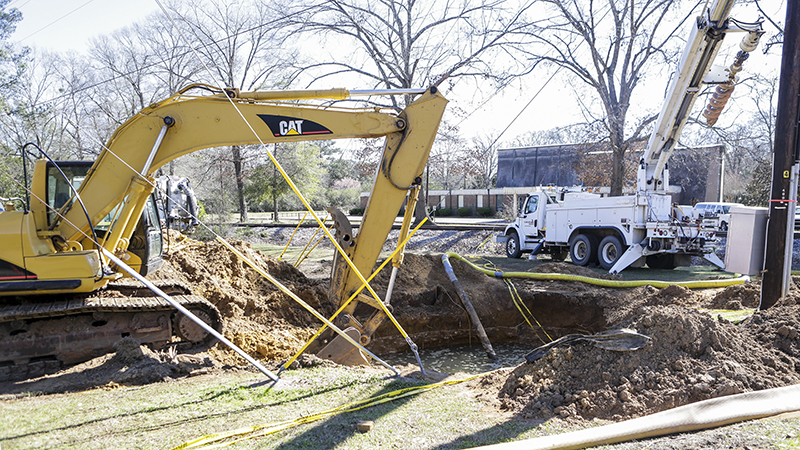 Crews work Monday to repair a collapsed sewer line on Crescent Hill Drive. In Shape Fitness flooded as a result of the damaged pipe.

Last Thursday afternoon was just like any other at In Shape Fitness on Crescent Hill Drive until a pipe collapsed, causing sewage to backup throughout the entire gym.

David Johnson, owner, said he was in the middle of leading the afternoon group workout when he noticed water bubbling up from floor drains in the kitchen.

“It started collapsing late Thursday night, and it backed up,” VanDiver said. “We tried to bypass it and continue to work on the pipe throughout the weekend and realized it was in a bad deteriorating state, so we had to call in a construction company to go ahead and lay some new pipe in that area.”

Johnson said after a few quick phone calls, city workers were on site trying to stop the backup.

“It was probably a good two hours before they could stop the flooding into the gym,” he said. “It pretty much covered the whole gym floor, the bathroom. It was a big mess.”

Johnson said the city had ServPro come out to clean up the mess, and the gym was back and running Monday morning.

“I was glad it happened when it did. Of course, you never want anything like that to happen, but fortunately it happened at the tail end of the week, so we only had to miss one day,” Johnson said. “Everybody was upset that they had to miss their workout for that day, but they understand things happen, and we were really happy to be back in action.”

VanDiver said he expected the new pipe to be laid and tested Monday night. He said the project should be done sometime Tuesday.

He said the collapse did not have any effect on power lines. VanDiver said an Alabama Power truck was just there Monday to secure a pole while contractors worked on the cave-in.