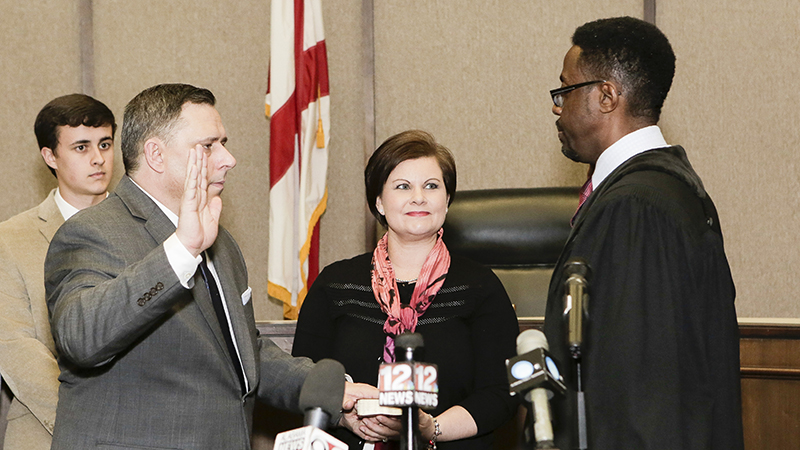 Newly appointed Police Chief Spencer Collier said there was no hesitation when he was offered the job as top cop in Selma by Mayor Darrio Melton.

Collier, who was appointed and sworn in at Selma City Hall Monday afternoon, said he had other opportunities, but this was the job he wanted.

“When I was contacted about this, I immediately knew I wanted this job for two reasons,” Collier said. “Number one, the challenge and the opportunity to improve public safety in probably one of the most historic cities in the country. And number two, I wanted to work for Mayor Melton.”

Melton was enthusiastic about Collier’s appointment, calling him a friend and colleague after serving a brief stint in the Legislature together.

Collier most recently served as secretary of the Alabama Law Enforcement Agency from 2013 to 2016, overseeing 1,400 employees and a $150 million budget. He started his career in law enforcement in Prichard as a police officer before working as an Alabama State Trooper.

After spending 10 years in law enforcement, Collier served two terms as a state representative for Mobile County. He was later appointed head of Homeland Security for the state and eventually named secretary of ALEA.

“We wanted to make sure we had someone with experience with administration, had experience working with different agencies on the local, Federal and state level, and that’s what we believe it’s going to take to be able to address the crime issues that we have in this city,” Melton said during a press conference.

Collier said the first thing he wanted to do was meet with officers and then with the community. The new police chief said it is going to take help from the community to change the culture in Selma.

“We’re going to need help from the community. What I want to do is coordinate all of that. Let’s get everyone to sit down at the table, and let’s see what we can do to improve the public safety in Selma,” Collier said.

He also wants the department to have more of a presence in the community.

“We’re going to start marking police cars so the citizens will know and see officers on the street as opposed to so many unmarked cars. I know just having the presence of law enforcement can deter crime,” Collier said.

When asked about pay and recruiting officers to come to Selma, Collier said Selma’s starting salary is comparable to the starting wage of a State Trooper.

“I firmly believe that law enforcement should be paid putting their life on the line, but if you look comparatively, it’s really not that far off scale. It’s not that big of a difference between starting pay in Selma and a Trooper,” Collier said.

“We want to give law enforcement if they’re already certified a reason to come to Selma, and if not, we’ll recruit and train some that will do that.”

Collier also acknowledged the past year, which he said was rough, after being fired by Gov. Robert Bentley in March 2016 from his position with ALEA.

Bentley alleged a misuse of funds, but Collier was cleared of any wrongdoing by a grand jury.

“What’s happened is in the past. Whatever criminal investigations or civil lawsuits are going on, that’s behind me,” Collier said. “The caliber of executive leadership here, it is very, very impressive, so I look forward to that because for four to five years I didn’t have that.”

Collier said it has been a rough 15 months, but he knew he wanted to get back into law enforcement.

“I told the mayor it’s a bit like being in the ministry or clergy. You know if you were meant to do it or if you’re not,” he said.

Collier said he is involved in an ongoing civil lawsuit, which accuses Bentley of wrongfully firing him, but he is ready to get to work.

“I personally told the mayor to annually hold me accountable,” he said. “I’m willing to take on that challenge, and I’m convinced we can do it as a team.”

Melton declined during the press conference to discuss Collier’s salary but said he would be willing to share that at a later date. Collier is expected to take over as chief Wednesday.