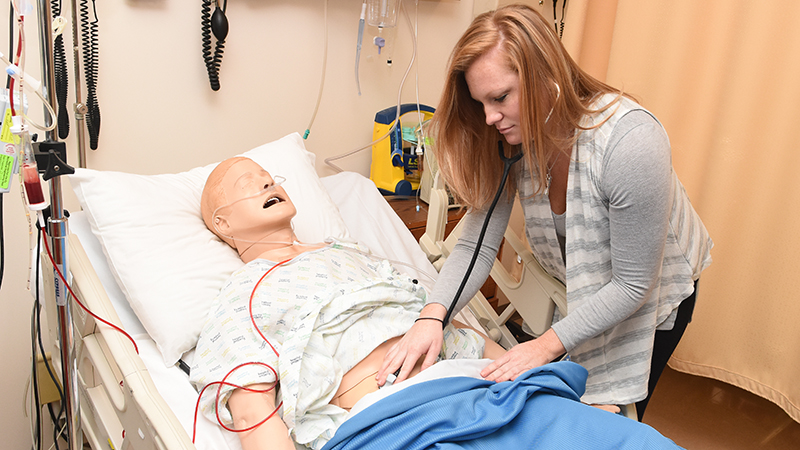 The Wallace Community College Selma nursing program ranks above the national average in pass/fail rates for the National Council Licensure Examination, which determines if it’s safe for a student to begin practice as an entry level nurse.

“Our ultimate goal is to meet the student where they are and we have an extensive evaluation that we do from admission through graduation … to closely monitor their progression,” said Dr. Tracey Shannon, Wallace’s Director of Health Sciences. “As we move forward, we do remediation to make sure all of our students stay on course.”

Registerednursing.org, an online resource for future and current registered nurses, ranks Wallace as the No. 16 nursing program in the state of Alabama. Shannon points to dedicated instruction and a supportive administrative staff as why Wallace’s nursing program, which includes about 145 students, is having the success it is.

“Most of our students are employed when they leave here,” Shannon said. “They have jobs waiting on them.”

Wallace students begin clinicals during their first semester at area nursing homes and work their way into time at Vaughan Regional Medical Center and in hospitals in Montgomery.

Students also learn through the college’s simulation lab, which puts students in real situations and allows them to work through them. The lab opened about three years ago.

“We use simulators that we can speak to and they also speak back to the students so that they can hone in on assessment and skills where if they make a mistake, it’s not a detrimental mistake,” said Pearlie Miller, assistant coordinator of the nursing program. “We can correct as we move along. We do a pre-simulation briefing and then after the simulation we hold a briefing with the students as to what happened with the simulation, what they could’ve done better.”

Miller and Sarah Davis, another assistant coordinator of the program, both work part time at Vaughan, which they say allows them to stay “on the cutting edge” on all the latest techniques at use.

“When we go in there, we are teaching current and I think that’s very important to the student,” Davis said.

Students enjoy the smaller classes and one on one instruction that they get from professors that stay up to date on the nursing field. Anna-Michael Oakley said she went to a state university to begin her time in college, but struggled with the large classes.

“The classes were huge, the teachers didn’t know who you were, they didn’t know if you went to class, so therefore when they don’t care, you don’t go to class,” Oakley said. “For myself, I guess that’s why I like Wallace. It’s smaller classes. I know who Dr. Shannon is. I know all my teachers’ names. They know if you aren’t here. They look for you if you aren’t here.”