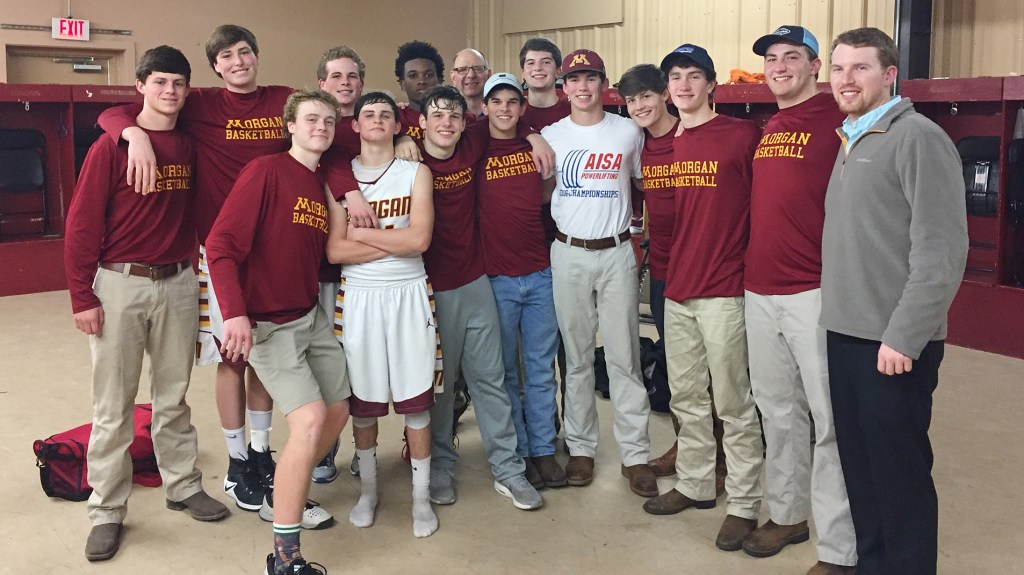 The Morgan Academy boys basketball team poses for a photo after winning the area title on Monday. The Senators defeated Monroe Academy 46-44 to win the area and to clinch a spot in the Alabama Independent Schools Association state quarterfinals.--Daniel Evans

Morgan Academy senior Caleb Pitts saved his best game of the season for his final home game in a Senators’ uniform.

Pitts scored 14 points Monday night to lead Morgan Academy (9-9) to a 46-44 victory over Monroe Academy and to the class AAA, area 2 regular season title. Monday’s game was the regular season finale for both teams, but it was essentially the area championship game, with the winner earning the area title and an automatic berth into the Alabama Independent Schools Association quarterfinals.

It was also senior night for Pitts and Terrence Wilson, who played significant minutes Monday after battling injuries for much of the year.

Morgan jumped out to a 14-3 lead after the first quarter, only to watch Monroe come back and grab the lead late in the fourth quarter.

“We fought back after that and got ahead of them and it stayed that way,” Tate said.

Sawyer Hopkins scored 10 points and had 11 rebounds to join Pitts in double figures.

The Senators finished the year with a 5-1 record in area play.

Morgan will play Thursday in the region 2 tournament at Fort Dale Academy, but will get a bye in the first round.

Tate said the Senators will play the winner of the Pike Liberal Arts/Hooper Academy game in the second round.

All of the first round games are elimination games, so the loser of those contests will see their seasons end. The winners, and Morgan because of its first round bye, will play for the region title and for seeding in the state tournament.

The region tournament bracket will not be completed until the completion of Tuesday’s games.