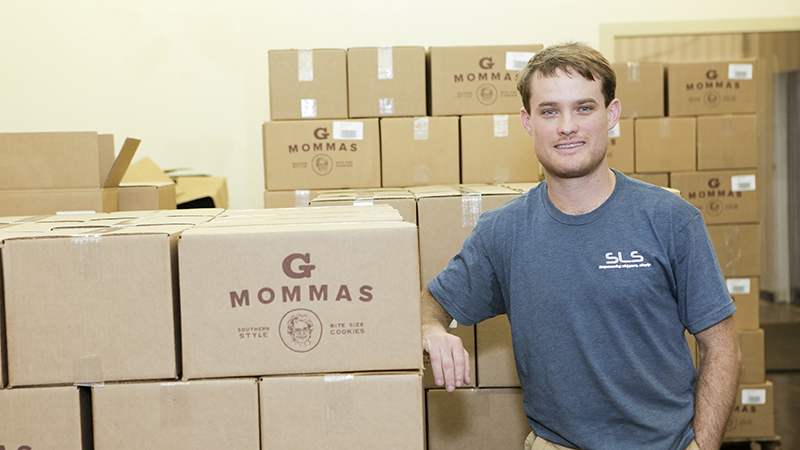 Robert Armstrong and G Mommas Cookies have been named as one of nine finalists for the Alabama Launchpad Startup Competition. A panel of judges will decide how the competitors split a cash pool of $250,000.

Selma native Robert Armstrong, founder of G Mommas Cookies and the Selma Good Company, has been selected as one of nine finalists for the Alabama Launchpad Startup Competition.

Armstrong and eight other entrepreneurs will have the opportunity to make a pitch in front of a panel of judges before being assessed and making it to the finals, where a cash pool of $250,000 will be split up as the judges see fit.

“I guess it really hasn’t hit me yet … but it would be huge for me,” Armstrong said of finding out he was in the top nine. “I would be pretty ecstatic to win.”

The idea to even begin the company came from his grandmother, Anice Morris Armstrong, who made his favorite chocolate chip cookies when he was in grade school. In 2009, Armstrong took that idea and made it a reality.

Now, G Mommas Cookies are in more than 1,000 retailers across the United States, but Armstrong said he is hoping to win this money and focus on brand awareness and selling more of the product in the stores.

“Ultimately, I’m trying to get more brand exposure,” Armstrong said. “I would like to not only get in to more retailers, but when we get in to retailers to sell better.”

According to Alabama Launchpad’s website, Alabama Launchpad is a program of the Economic Development Partnership of Alabama that promotes and rewards high-growth, innovative startups from across Alabama.

Alabama Launchpad is for new, innovative ventures in the seed or early-growth stages, or for existing businesses moving into a new high-growth market.

Armstrong said one of his biggest motivations in his business is the community of Selma.

Armstrong and the other eight participants were selected out of numerous applications and will make their pitch Friday, Feb. 24 in Birmingham in front of the judges.

Armstrong said he hopes to win part of the money to take his business to the next level.

“These marketing dollars would go towards the southeast,” Armstrong said. “I need every house in the southeast to know about G Mommas cookies.”