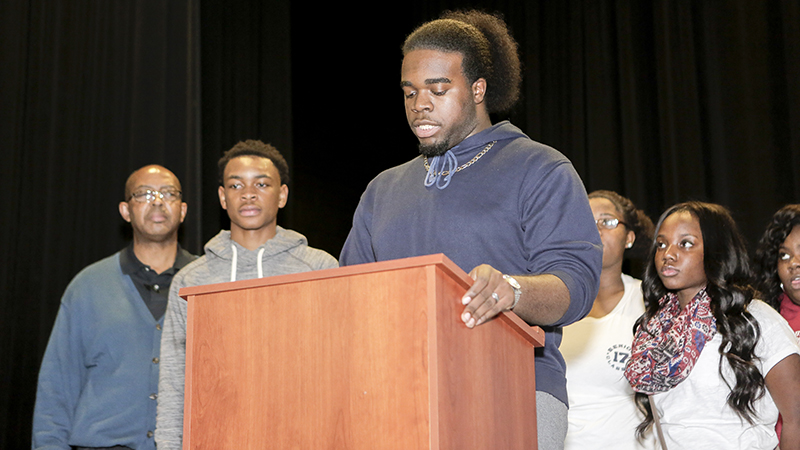 Willie Gilmer practices his part as Martin Luther King Jr. for a reenactment being put on by the Links of Selma.

Just over half of the number of registered voters in Dallas County showed up to the polls in November, and the Selma Chapter of Links Inc. is hoping to improve that number.

The volunteer service organization is teaming up with One Selma, Historic Brown Chapel A.M.E. Preservation Society and Selma City Schools to put on a forum and reenactment next week to help inspire high school seniors to vote.

“The premise behind this is that only about half the people in Selma vote. We’ve done everything. We’ve done PSAs, articles, we’ve done all kinds of things, but it has not really changed the needle,” said Juanda Maxwell, who wrote the reenactment and will also direct it. 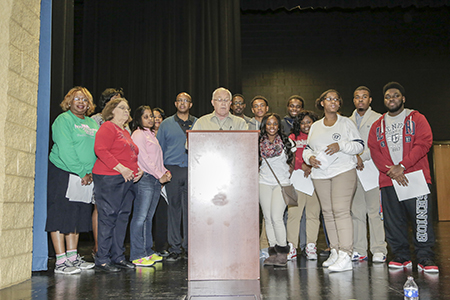 Peter Stanfield portrays President Lyndon B. Johnson in the reenactment.

“Not here in Selma and not really in the country. So what we thought was that we would go to seniors and expose them to the sacrifice that it took to actually garner the right to vote and that both black and white people sacrificed for it.”

Members of the Links, other sponsors and Selma High School seniors will portray characters in the Civil Rights Movement. Willie Gilmer, a senior at Selma High School, will play the role of Dr. Martin Luther King Jr.

“When I picked the park of Martin Luther King, I saw it as my chance to really dig deeper into his story and just really feel what he felt to try and be in those shoes, just to be able to lead the march and do such great things that he did,” Gilmer said.

Alexander Bennett, also a senior at Selma High School, will play the role of John Lewis.

“For me to be a part of it, it’s just very intriguing,” he said. “It really shows what happened in history and how now everybody knows not just the same basic people, but you get to branch out and see others like John Lewis, J.L. Chestnut and so on.”

“How do you tell the story? Everybody always just tells the story about the day Bloody Sunday, but what about all of those things that lead up to it? What about all the inspirations for Dr. King? What about Abraham Lincoln? What about Lyndon Baines Johnson,” Maxwell said. “All of those people played a part. It wasn’t one event.”

Maxwell hopes seeing the sacrifices that were made by these figures from the movement and many others will show how important it is to vote.

“We feel like if we taught them and asked them to pledge to be lifelong voters, then maybe it might stick in their hearts,” she said. “You can’t change people when they’re older, so we’re trying to change them when they’re younger and more malleable.”

The reenactment will be at Selma High School in the auditorium Friday, Jan. 27 from  9-11 a.m.