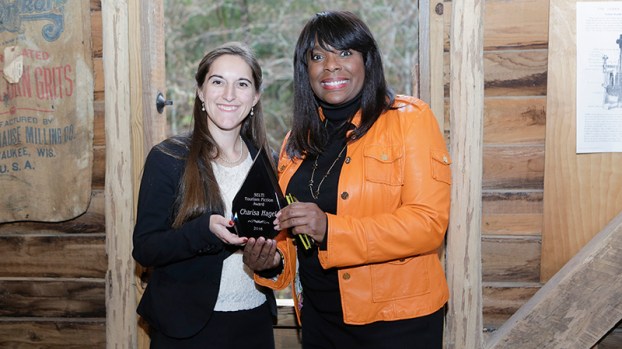 Short story award winner Charisa Hagel was presented her award by U.S. Congresswoman Terri Sewell on Monday at Kenan’s Mill, where her story is set.

The Selma and Dallas County Chamber of Commerce teamed up with the Southeastern Literary Tourism Initiative and the Alabama State Tourism Department to host a writing contest, where the winner, Charisa Hagel, took home $500 cash and the 2016 SELTI Tourism Fiction Award in Dallas County.

Hagel said she was excited to find out that she won the competition.

“I was ecstatic,” Hagel said. “I couldn’t stop smiling all day long.”

Hagel’s fictional story was based at Kenan’s Mill in 1866 and was about a young boy and girl who were playing at the mill, even though they knew they weren’t allowed.

Hagel, who had never been to the mill prior to the award presentation, said she found her inspiration by digging around online.

“I started Googling attractions and the mill caught my attention,” Hagel said. “So I found pictures of it, and I saw the bridge and the there’s a back window, and I thought, OK, I have a story.”

Hagel, who resides in Wetumpka, is a recent graduate of Faulkner Christian University in Montgomery and majored in English with a focus in creative writing.

“I just graduated, and I don’t have an outlet for my writing yet, so I took advantage of it,” Hagel said. “I did what I set out to do. I’m actually really pumped that I did win because that meant I accomplished my goal.”

Hagel said she enjoyed getting to visit the place she had written about, and actually walk up to the window that is mentioned in her story.

“It’s really cool to actually visit the place that I wrote about since it was really attractive in my mind of how I thought it would look, and the pictures I saw,” Hagel said. “Actually, getting to see it is like a story coming true.”

Selma native Congresswoman Terri Sewell was on hand to present Hagel with her award and to give her a Congressional Record stating her success in winning the competition.

“I just wanted you to know how proud we are of you and your story,” Sewell said to Hagel. “As a native of Selma, I have to tell you, you captured it perfectly. It was great.”

Hagel’s story was chosen out of 16 fictional stories and can be read online at selti.org.

Landon Nichols, marketing coordinator for the Chamber, said he enjoyed the story and how it incorporated Kenan’s Mill.

“I loved it. I thought it was a great way to present a setting of Selma and Dallas County that you don’t always hear about,” Nichols said. “You hear so much about Civil War history and our Civil Rights history, so it’s kind of nice to look outside of those two major flash points at some of the other narratives going on in the area.”

Vaughan Regional Medical Center brought an old tradition back to life Thursday night with the lighting of a nearly 30-foot... read more