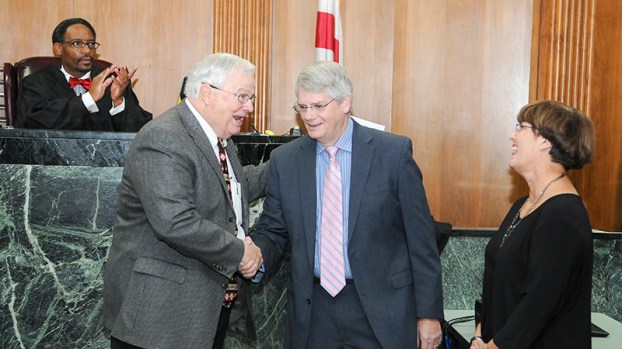 Attorney Ralph Hobbs shakes hands with retired Fourth Judicial Circuit Court Judge Jack Meigs on Monday after he was presented a resolution in his honor.

Meigs honored for career on bench

The Dallas County Bar Association recognized retired Fourth Judicial Circuit Judge Jack Meigs for his 25 years of service Monday. He was presented with a resolution that was read by attorney Ralph Hobbs.

“Therefore, it be resolved by the Dallas County Bar Association that we do hereby gratefully acknowledge the dedicated and exemplary service of Jack W. Meigs to the Fourth Judicial Circuit Court Bench,” the resolution read.

The resolution was read and presented at the Dallas County Courthouse in front of a packed courtroom before circuit court got under way.

“It was an honor for them to do that. Normally, they wait until you die,” Meigs said with a laugh. “But I didn’t have to wait until I died to get one. It’s nice to be appreciated, especially by folks you’ve worked with for so many years. I really appreciate it.” 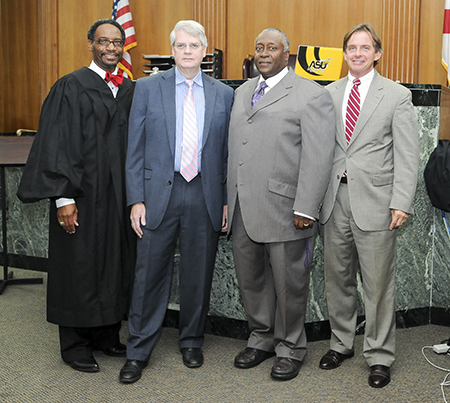 Meigs poses with judges Marvin Wiggins, Collins Pettaway and Don McMillan. Meigs was appointed to the bench in 1991.

“There was an open seat, so I worked to get the appointment,” Meigs said. “I was appointed March 1, 1991, and actually took office a week later.”

“I think you appreciate any worthy judicial experience but certainly when you’ve got a judge who has become even more seasoned,” Blackwell said. “That is a quarter of a century. We live in a busy world, but I think so many times we don’t pause and take time to honor those that should be honored.”

Blackwell said Meigs was very detailed in the work he did.

“Judge was very attentive to cases. He had a good record with the state’s appellate courts,” Blackwell said. “The one thing I admire was that he was rarely reversed. He certainly was a judge who was willing to try cases. I think he was fair to all parties involved.”

Meigs said it was an honor to be recognized and reciprocated the appreciation that was shown to him for his service.

“I just appreciate all the attorneys that I’ve worked with, the people I worked with in the court system and the different clerks offices and judges offices,” he said. “I feel like everybody has treated me well, and I hope I have treated them well. I appreciate the folks in the Fourth Judicial Circuit for giving me the opportunity to serve them that long.”