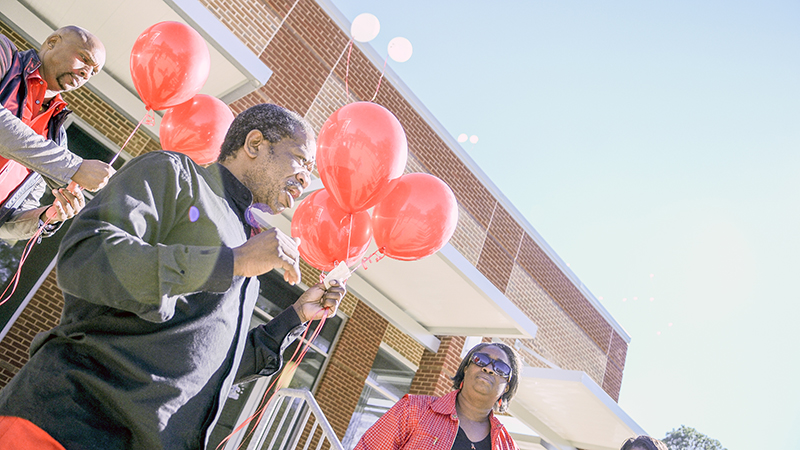 Christopher Bowers releases balloons Thursday for World AIDS Day in honor of people who lost their lives from HIV and AIDS.

The high school’s auditorium was packed with students from 9th through 12th grades, who listened to Lydia Chatmon and others from Selma AIR discuss the virus, how it affects people and how it can be prevented.

“This was just a phenomenal opportunity to reach the age group that is being most drastically affected,” Chatmon said. “The numbers are on the rise across the country among 14 to 25-year-olds, so we really need to pay very close attention and be open to at least having a conversation with our young people.”

Chatmon, who is an HIV prevention specialist, said it is important to teach people about HIV and AIDS at a young age so they can make better decisions.

“As teenagers we tend to make a lot of risky choices and take risks at a higher level than we would as adults, so it is important for us to equip young people with the facts so that at least they have a basis for which they can make their choices,” she said.

While having AIDS has changed because of medical advances, Chatmon said it is still important to inform people about the virus.

“There are medications that have really helped people live 20 or 30 years with the virus; however, just because it’s not the same diagnosis, it does not mean it is something we don’t need to pay attention to,” she said. “HIV is a 100 percent preventable virus. We do not have to have another new case of HIV diagnosed. We just have to make the right choices.”

Selma AIR started out as just a group of volunteers, and Chatmon said it is amazing to see where it has come from over the last 21 years.

“We are ecstatic about the first 21 years and looking forward to 21 times 21 more,” she said. “When all of us are dead and gone, you know that Selma AIR will continue to carry the legacy of making sure that we not only provide prevention strategies and education but also provide honorable services to those who are infected with HIV or AIDS.”

Selma AIR, along with members of the Selma High School Student Government Association released balloons for the 21 years of service the organization has and for the lives that were lost this year from HIV and AIDS.

Anyone interested in learning more about HIV or AIDS or needs assistance, can call 872-6795.