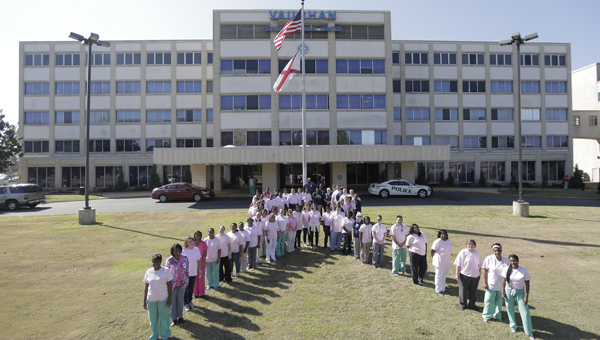 Vaughan Regional Medical Center employees form a ribbon in front of the hospital Friday morning in honor of Breast Cancer Awareness Month. Employees purchased T-shirts from the hospital’s Relay For Life team and have been wearing them on Fridays in October.

Vaughan Regional Medical Center employees dressed up in pink Friday and formed a ribbon on the hospital’s lawn for Breast Cancer Awareness Month.

“It’s so exciting to get the whole hospital involved. It just helps morale and team spirit, and it supports breast cancer awareness and all cancer awareness,” said Maegan Austin, director of physician relations and industry at the hospital.

Vaughan started selling pink T-shirts for their Relay for Life team and hospital staff wore them each Friday in October.

Sharesha Sneed, Meditech coordinator at the hospital and the Relay for Life team captain, said creating the shirts and having everyone wear them for the ribbon out front was great for the hospital staff to show their support.

“It means a lot to me. I do have relatives that went through breast cancer … so I’m really involved in it, and I enjoy just socializing with coworkers, family and friends just having fun and doing what they can do to raise money for a good cause,” Sneed said. “Everybody was excited. It brought the morale up and brought everyone close.”

Sneed said the hospital has seen their share of those affected by all forms of breast cancer, and this was a way for them to honor those people.

“We have lost a lot of coworkers with breast cancer over the last three or four years,” Sneed said. “We have survivors as well, and it helps them to know that someone is still out there trying to support [them].”

Sneed said her hope in raising money for the American Cancer Society is that one day cancer will be a thing of the past.

“We always have hope that some day it won’t cause the problems that it’s causing for them to go through for treatments and the amount of money and the troubles and the suffering, that it will be better,” she said.

Austin said that they also want to remind women, and men, to do self-checks and for women to get their annual mammograms and that early detection is key.