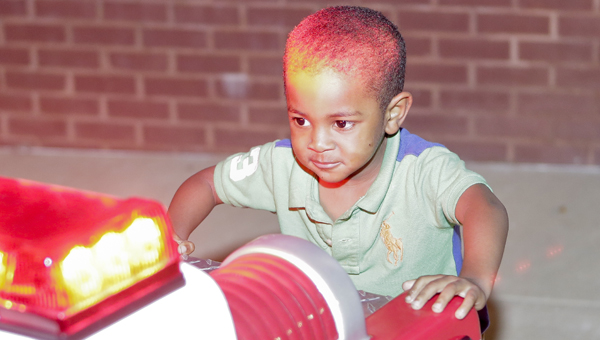 Several hundred people attended the city of Selma’s Crime Night Out Thursday at the Selma Amphitheater.

“[The event is] very important for the youth. Right now, they need guidance. We’ve dropped the ball, a lot of us as parents, but as far as getting the message to the young kids, that’s what we need to do,” said James Johnson, who attended the event. “Having a gathering like this means a lot, coming together as one.”

The Selma High School band performed, along with the Selma High cheerleaders, Selma High choir and Concordia College Alabama’s band. Representatives from several city departments were on hand with posters and information to talk to people in the community.

“I’m out here to have fun,” Johnson said. “I had to see my grandson perform, Trey Johnson, they did a rap song “Put the Guns Down” which in Selma, that’s what we need to do.”

Johnson said the event was needed so the community could become more familiar with all of the city’s first responders.

“It should be putting a message out that you can trust the police and not be scared of them because they’re here to protect us,” Johnson said. “With the negatives that’s going on … right now in the United States with all the shooting and everything, to be able to come together like they did tonight is real good.”

Lt. Natasha Fowlkes with the Selma Police Department spoke at the event.

“So many times when we put this uniform on, we’re criticized, we’re talked about, but we still have to respond to you,” Fowlkes said.

“We take a lot of criticism from everywhere. But I don’t know if you would be willing to do what we do. This is our passion, this is what we live for.”

Fowlkes said working as a first responder is hard on their families.

“Our families don’t know if they’re ever going to see us again when we leave. And I just want to recognize first responders,” Fowlkes said. “No one up here got in this profession to get rich. You have to have a passion, got to have dedication to be a first responder.”