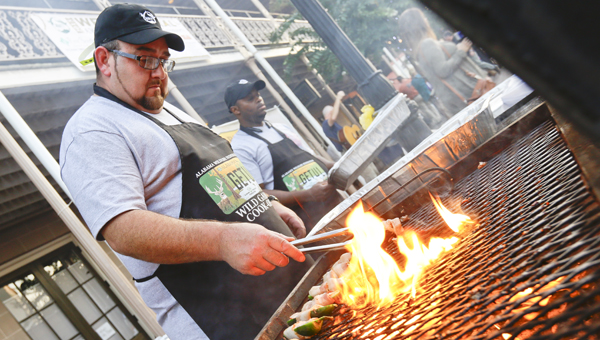 Most cook-offs involve barbecue or chili, but the Alabama Wild Life Federation’s is a little on the wild side.

The annual Wild Game Cook-off features all sorts of game. Last year, turkey, alligator, deer and crow were part of the contest.

“It’s just almost a festival in the streets. There’s plenty of food, there’s live entertainment and plenty of beverages,” said Tim Wood, an organizer of the cook-off. “It really is a lot of fun.”

Last year, Wood said 22 teams competed, and they are hoping for an even bigger turnout this year. Each team not only signs up for a chance to win, but they will also receive other incentives.

“Last year was the largest and the best year that we ever had, and we’ve had more interest this year than we’ve ever had before. So we think this is going to be a fantastic event this year,” Wood said.

Each team will receive four memberships to the Alabama Wildlife Federation. The captain of the team, or the person that signs them up, will be eligible for a drawing for a shotgun at the end of the event.

For every five teams that sign up, there will be a drawing for four tickets to the Talladega Superspeedway spring race.

Wood said it’s really about getting people involved in the federation, teaching the children about wild game and hunting and showing people the process of hunting to actually eating the wild game.

“What we wanted to do, is we wanted to make sure that people saw that what we harvested while we hunted, it was being consumed. It wasn’t just people going out shooting things,” Wood said. “We wanted to show that they were responsible and that there was a reason behind what they were doing. They were using what they harvested.”

Teaching children about the wildlife is a big part of the federation, and Wood said that’s an important part of the cook-off.

“It’s of utmost importance. We need to make sure that we teach our young people to respect the wildlife and the natural resources that we do have around here,” he said. “It is absolutely critical that we engage the young people so that we can help protect their hunting and their fishing heritage in the future.”

Wood said it’s also about the food and bring the community together to enjoy different, unique foods.

“It’s really unique because nobody else does it. These are people who are putting forth an awful lot of time and effort to try to win to be able to go to the state competition,” Wood said.

Sponsorships are also available for $250 and come with five tickets to the event, five memberships to the AWF and a drawing for a shotgun. Tickets are $50 for a couple and include one membership to the AWF. The cook-off is set to take place Oct. 27 at 6 p.m. on Water Avenue in front of the St. James Hotel. Wood said cook teams can register by calling him at the Central Alabama Farmers Co-op. Ticket information can also be obtained by calling the Co-op.