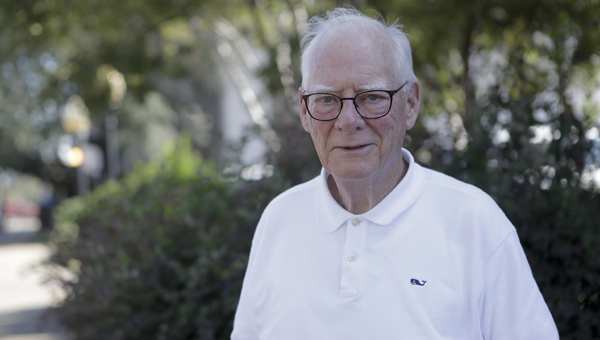 Daniel Clancey, a special agent for the FBI in 1965, revisited Selma on Monday. –Alaina Denean Deshazo

By Alaina Denean Deshazo
The Selma Times-Journal
After more than 52 years, a former Federal Bureau of Investigation agent that was involved in the 1965 Selma to Montgomery march came back to Selma to pay a visit.

Daniel Clancy, a special agent for the FBI during 1965, was assigned to cover the 5-day march throughout its entirety.

“I still remember getting a call from our headquarters on the Friday before the march saying that you are being transferred up to Selma temporarily,” Clancy said. “So we left on Saturday morning from Jacksonville, [Florida] and got up here.”

Clancy said before he was ever called to Selma, he and his wife, Carol, watched the events of Bloody Sunday unfold on television.

“They interrupted the program to show this. And we were just absolutely shocked. We could not believe that this type of beating and assault was taking place in the United States,” Clancy said. “We did not realize the significance of this in the United States history. It was probably the most significant event that led to the passing of [The Voting Rights Act of 1965].”

Although Clancy was from Cleveland, Ohio, he had been stationed in Jacksonville during that time and was called upon to supervise the march.

“Our role was to observe for any violations of the federal court order in which the march was taking place,” Clancy said. “We would stay with the marchers during the day until they got to the campsite, then we would come back to Selma.”

The agents were on 12-hour rotating shifts, and Clancy worked during the day.

“There were really no incidents that occurred during the march. … Nothing really happened until the last night,” Clancy said. “We were all out at Craig Air Force Base having dinner, and we got a call to return to our hotels in Selma that there has been a killing along the road.”

The killing was that of Viola Liuzzo, who was shot to death by members of the Ku Klux Klan while driving back from transporting fellow activists.

Clancy said he and the other agents met at the Federal Courthouse the following morning to receive their assignments in the investigation of Liuzzo’s death. Clancy’s assignment was to go with a team of agents to search for the ammunition and casings that had been thrown out of the car following the shooting.

“We started looking from the site that the shooting occurred and the car ended up, and we probably walked the entire distance to the Montgomery airport,” Clancy said of looking for the casings for five days. “We were walking along right over a site that we had already been over, and there laying on the top of the mowed grass was one of the spent cartridges.”

Dianne Harris, a foot soldier from the march, took Clancy and Carol, along with other family members, around Selma Monday.

“It brought back memories,” Clancy said. “There’s a few places that I still remember as I was driving down the main street.”

Harris said she was honored to have the opportunity to show Clancy around the city.

“As a 1965 foot soldier, student marcher, today has been most humbling for me as well as educational, because I never thought that I would be able to come in contact with or meet someone as Mr. Clancy’s stature as far as being a part of the historical movement that took place,” Harris said.

“It feels great to have been involved in that part of our history, that a real problem in the discrimination that was going on was addressed at least from the voting rights portion, was eliminated,” Clancy said.

Fair back in Selma

The swings at the Central Alabama Fair were a big hit as the annual event returned Monday to Lion’s Fair... read more