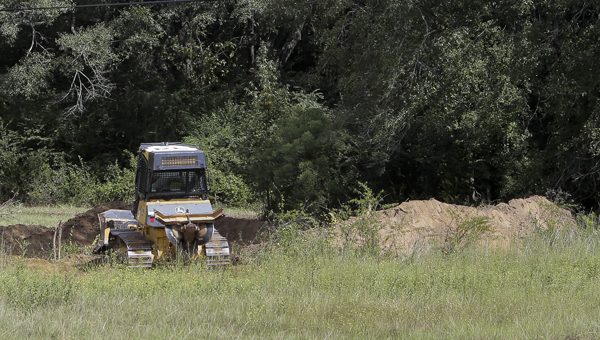 An excavator digs for two bodies that were believed to be buried off the U.S. Highway 80 Bypass. –Alaina Deshazo

By Blake Deshazo
The Selma Times-Journal

The Selma Police Department searched for two bodies Monday at an abandoned building on the U.S. Highway 80 Bypass, but didn’t find anything.

According to Lt. Sam Miller with the Selma Police Department, a tip came in that Warner Rose and Tarasha Benjamin, who have been missing since 2009 and 2010, were buried near the building.

“We got information that there were supposed to be two bodies buried by the Top Class Lounge on the bypass,” Miller said. “So the SBI coordinated a dig to try to see if we could locate the bodies.”

Miller said a backhoe dug up the area around the building for most of the day, but no bodies were found.

“We’ve already talked to the Benjamin family and advised them that we didn’t find anything,” Miller said. “I know the rumors are out there on social media and everywhere else, but we did not find any remains.”

Rumors were going around Monday that multiple bodies had been found.

“Unless the family has spoken directly with us, they probably really just need to ignore the ignorant people out there that are posting stupid stuff on social media,” Miller said.

“If we do find anything, we are going to notify the families, but as I told the family earlier, if we would have found something, the next step in the process is to take the remains and send them off to Quantico to be identified.”

Lt. Miller said Monday was the only day the department excavated the area.

“We came up here and photographed the scene and got the grass cut so we could prep the site to bring bulldozers and personnel in if we needed to, so we didn’t have to run into a bunch of rattle snakes,” Miller said.

Brock said the department would continue to look into future leads about the location of Rose and Benjamin.

“We’ve got several active missing persons cases, and they were two of them,” Brock said. “We thought one or both were there. We thought we had a good tip with good information.”

Brock said despite the cases being cold, they are actively looking into when a tip comes through. He urges people that know anything to contact the Selma Police Department.