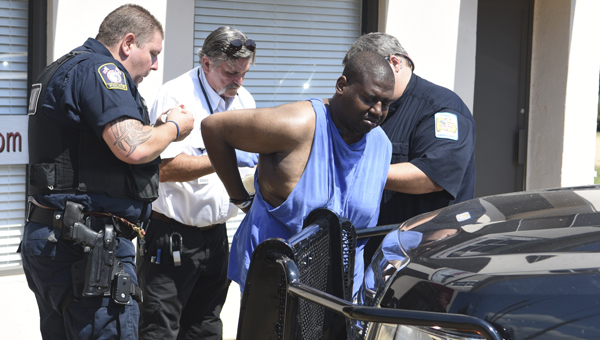 A man was arrested Thursday morning after assaulting an officer from the Selma Police Department.

Daniel Alexander, 33, was arrested and charged with disorderly conduct, assault third and resisting arrest and sent to the Dallas County Jail, according to Selma Police Chief John Brock.

Brock said Alexander was picked up by someone from the hospital Thursday morning and the two got into an argument. Alexander was dropped off on J.L. Chestnut and the person he was riding with called the police.

Officers responded to the call at about 11 a.m. and caught up to Alexander on Broad Street. Brock said Alexander attacked an officer, including elbowing him in the face and causing him to have a bloody nose.

“They had to wrestle with him, had to tase him and he popped one of the officers on the nose and mouth,” Brock said.

That officer has since been treated and released from Vaughan Regional Medical Center.

“He had a bloody nose and a couple of scrapes on his arms and elbows,” Brock said.

The victim also received a couple of scrapes and was also treated.

Brock said he does not know why Alexander was in the hospital originally but said he’s been told Alexander has mental problems.

He also said he’s not sure why Alexander was mad. Officers on the scene never got an answer.