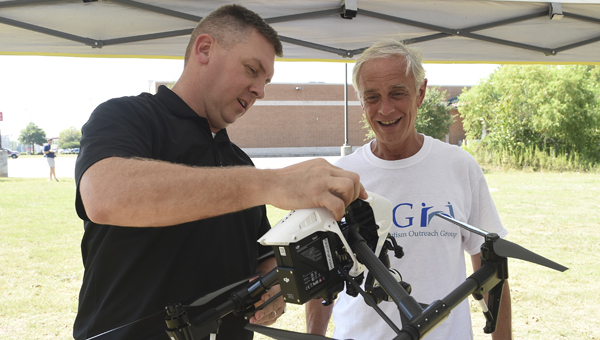 Andy Beck with Viper Imaging shows off a drone to Oscar Wayne Calloway with the Alzheimer’s-Autism Outreach Group.

The group donated a drone to the Dallas County Sheriff’s Department in July and had a similar drone outside Hardee’s Thursday to show customers where their money was going. The drone was flown Thursday by Viper Imaging, which showed off how helpful technology can be in finding a missing person.

“[This helps] tremendously because we get other donations too,” said Oscar Wayne Calloway, director of the Alzheimer’s-Autism Outreach Group. “People come by and have written us checks.”

Calloway said in the next few weeks training will start for the Dallas County Sheriff’s Department and officers from Montgomery County. Calloway said the Alzheimer’s-Autism Outreach Group is paying for two officers to be trained by the Auburn Aviation Center.

Money raised Thursday will help fund the purchase of a new infrared camera that will make it easier for a missing person to be found at night.

Ryan Hittie, who was flying the drone, showed off the drone’s infrared skills Thursday afternoon and even from 400 feet in the air, it was possible to spot a person walking around.

Sheriff Harris Huffman said in July that the drone will be primarily used for Program Lifesaver searches, a nonprofit organization that provides tracking technology for the search and rescue of individuals with cognitive disorders.

Huffman said the drone will also be used in the event of a disaster.

“They are really excited about it because nobody else has one in the state,” Calloway said.

“They’ve got something that is going to help them locate people that wonder from home.”