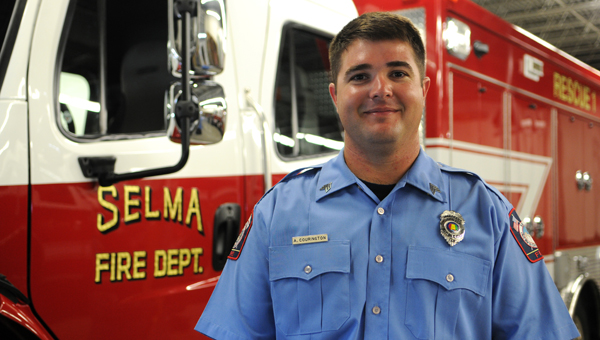 For the past eight years, Sgt. Adam Courington has served on the Selma Fire Department and was recently honored for his hard work and dedication.

Courington was honored with a community Firefighter of the Year award from The American Legion.

“I think it’s an honor for me to get it,” Courington said.

SFD Fire Chief Toney Stephens said the decision to nominate Courington for the award was a collective effort of the staff personnel. He was chosen for his performance around the station, on the fire ground and in the community.

“Adam Courington is a very, very good firefighter,” Stephens said. “Courington goes above and beyond in all aspects.”

He said although Courington’s performance is excellent at both the fire station and the fire grounds, Courington is a natural when it comes to public relations.

“We are big on public relations and that’s something he enjoys doing,” Stephens said. “He likes to mingle with the crowds. He’s very good with the kids.”

Courington is originally from Clanton and moved to Selma fresh out of high school after getting a job with the city’s fire department.

Courington said one of the things he enjoys the most about the job is the strong friendships built over time.

“I like the camaraderie that comes along with it,” Courington said. “You live a third of your life with these guys. Someone is always there to watch your back for you when you can’t watch it.”

He said, at the fire station, grilling is a favorite way to cook meals. He also said he enjoys fishing in his free time.

The Selma Fire Department averages about 700 calls per year with about 30-40 of those being house fires.

Stephens said the work the firefighters do on a daily basis is a service that is often unappreciated, and he is glad The American Legion has a means to show the appreciation they deserve.

“It feels good to actually be able to give these guys recognition for some of the things that they do,” Stephens said.

“They do so many things that most people take for granted but every now and then an individual needs a pat on the back just to let him know that you recognize the hard work that he’s putting in and the good job that he’s doing.”

All-Stars given hero’s welcome on return