Integrity Worldwide back from Meto 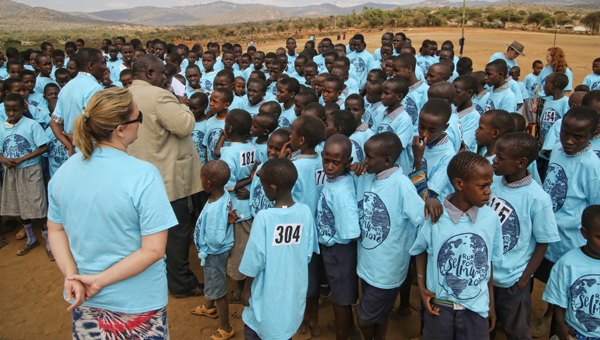 Since she was 12 years old, Selma resident Kenzie Horton has sponsored a student in Meto, Kenya.

Now 16, Horton had the opportunity to meet her sponsored student while on an Integrity Worldwide trip to Meto.

“I couldn’t stop smiling,” Horton said of her first face-to-face interaction. “She told me that without her [sponsorship] she wouldn’t be able to get out to school, and she wouldn’t have been able to get out of poverty. She helped me become more responsible and grateful for what I have.”

Horton was one of a 12-member group who participated in Integrity Worldwide’s annual mission trip, many of them first-timers.

This year, some of the main goals of the group were to provide medical and dental clinics, organize the second annual Run for Selma 5K race on Meto school children as well as break ground for the area’s first permanent medical clinic.

“I think it gives them hope. I think it shows that someone cares,” said Alan Hicks, MD and co-founder of Integrity Worldwide.

Hicks and his wife, Averee, founded the organization 10 years ago after participating in a missionary trip with their church. He said the mission trip brought them to Meto for the first time and although they were only there for a few hours, it left a lasting impression on the couple.

Within the past week, the organization broke ground for the first medical clinic in the area. The clinic will be about a two-hour driving trip from Meto and will be the closest medical facility for the area. Alan hopes the clinic will be complete within the next year. Once it’s open, it will be staffed full time with a nurse and a doctor several day each week.

Although the trip’s mission is to change the lives in Kenya, it changed the lives of the first-time travelers as well.

“Words can’t describe it,” said Doug Horton, Kenzie’s father. “The thing that laid on me the most is what the people have to go through to get water and how valuable water is to a community. Before they got the well, they were having to travel close to 20 miles just to get water.”

He said before children who had to travel for water couldn’t go to school or enjoy being a kid. With the well only about two miles away, the children have more time and can go to school and enjoy activities like the organization’s 5K run.

“It was just the craziest thing,” said 17-year-old Ali Nettles of the children’s 5K race.

“To watch them enjoy that moment was awesome.”

Nettles said she participated in the trip as a means to get out of her comfort zone and was more than happy of her decision to go.

“They just taught me to love more,” Nettles said of the people of Meto. “They were so welcoming but we were strangers.”