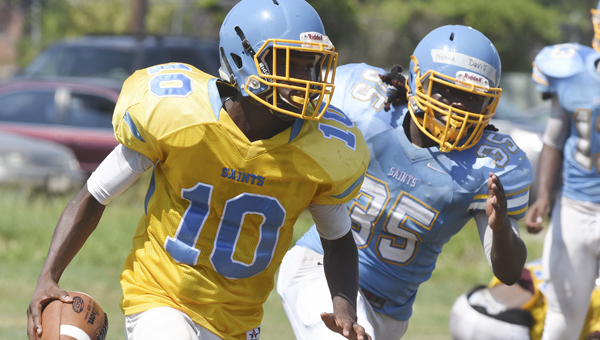 Selma High School quarterback Tyreshon Freeman runs around the end for a first down during Saturday’s intersquad scrimmage. –Daniel Evans

Selma High School’s spread offense is coming together, but it’s still a work in progress.

It was clear he could see the strides the team has made in recent weeks.

“When the kids are doing well, [I] am going to show that energy. I am going to full of energy with them,” Handley said. “It’s still a game and the game has to be fun.”

The scrimmage wasn’t just a way for Handley to see where the team stood going into the final few weeks of preseason practices. Selma High also welcomed the community to attend, so that it could see the Saints new look offense.

Those who did attend saw the work in progress Handley has pointed to throughout the offseason. The offense showed signs of life, highlighted by Ervin’s three touchdown passes to Curtis, but it was the defense that again shined brightest.

The team was divided into Blue and Gold, with Gold representing the offense and Blue the defense. Points were awarded at the end of each series. If the offense scored a touchdown, it got six points. If the defense stopped the drive, it was awarded six points.

The Blue team won 38-24 after scoring 20 straight points to break an 18-18 tie. The scrimmage was close until Gold quarterback Tyreshon Freeman was sacked in the end zone for a safety, resulting in an eight-point drive for the defense.

The defense also stopped the next two Selma drives, which allowed the Blue squad to build a 20-point lead.

“We were very aggressive, and we flew around to the ball,” Handley said of the team’s defense.

“As long as we keep flying around, we are going to be alright.”

Both Ervin and Freeman threw 20 passes in the scrimmage. Ervin, a senior, was 12-for-20 and had three touchdowns. Freeman, a freshman, was 10-for-20 and was intercepted.

Handley came away impressed with both quarterbacks.

“I was extremely pleased with Kordez. He was able to check. He saw the blitz coming, He would see the pass and he would take it. No hesitation,” Handley said.

Freeman used his legs to scramble for first downs multiple times. Handley said he’s working on ways to get Freeman onto the field this year, likely in a wide receiver role.

The Saints will hold another scrimmage next Saturday, so that Handley can get another look at the team. Selma will open its regular season Aug. 26 against Southside at Memorial Stadium.