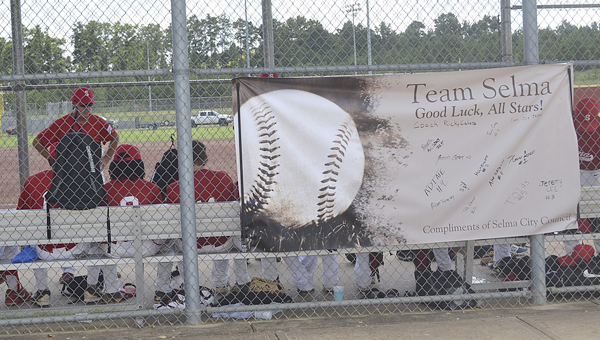 The Selma baseball team sits in the dugout during Saturday’s game against Florida. –Submitted Photo

Milam Turner led off Saturday’s Dixie Boys World Series with a single to give the Selma All-Stars exactly the start they were looking for.

Unfortunately for Selma, Turner’s leadoff single wasn’t a sign of things to come. Selma managed only two more hits the rest of the way and fell to Spring Hill, Florida 4-0 to fall into the tournament’s loser’s bracket.

“We just could not hit the curveball,” said Selma coach Ricky Waters. “I think we had 11 strikeouts.”

The game was tied 0-0 until the third inning, when three errors cost Selma. At that point, Florida was able to take a 3-0 lead and added a fourth run in the seventh inning.

Selma even managed to get runners on second and third base in the seventh inning, but couldn’t keep the momentum going.

No player on Selma’s team has played in the World Series, but Florida’s team came in experienced. Florida won last season’s Jr. Dixie Boys Tournament and now has its sights set on the Dixie Boys crown.

“We played pretty good. We just played some tough pitching,” Waters said. “We are facing the best pitching in the state of Florida in the Dixie Youth Baseball program. It’s a different level than the state tournament.”

Jeremy Lee was the starting pitcher for Selma and threw 45 pitches. A.D. Tate came in as a relief pitcher and finished the game, but he also stayed within the 45 pitch limit. Waters said because both pitchers had limited days, every Selma pitcher will be available for Sunday’s game against the winner of Saturday’s North Carolina/South Carolina game.

Waters said his team took confidence away from Saturday’s game, where they played toe-to-toe with one of the tournament’s best teams.

He said the biggest adjustment for Sunday’s game is for the team to use more patience.

Selma will play at 1 p.m. Sunday. The tournament is taking place in Pineville, Louisiana.