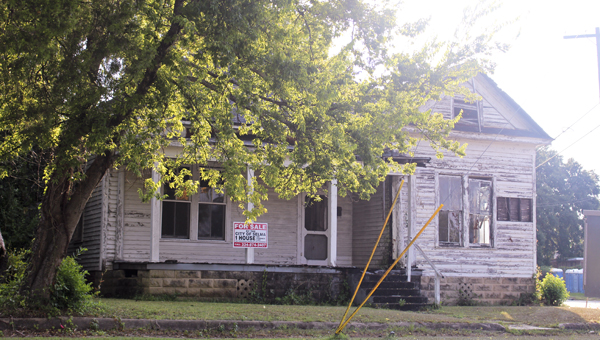 The Selma City Council is discussing selling this home and two others near the intersection of Lauderdale Street and J.L. Chestnut Blvd.

The Selma City Council voted Wednesday to sell a dilapidated home on the corner of Lauderdale Street and J.L. Chestnut Blvd. and other nearby properties, but it’s not clear if the sale is a done deal. The proposal from Rivertown Properties to buy 901 Church Street, 907 Church Street, 900 Tremont Street and surrounding vacant lots for $20,000 has repeatedly failed over the past three months.

The proposal from Rivertown Properties to buy 901 Church Street, 907 Church Street, 900 Tremont Street and surrounding vacant lots for $20,000 has repeatedly failed over the past three months.

The main objection centers around the fact the same family has occupied the home on Tremont for more than 25 years. The city took over ownership of the property around 2011.

Real estate agent Jewell Williamson made an offer on behalf of Rivertown Properties and owner Sylvia Smith back in April. Smith told the city council she wanted to improve the neighborhood by renovating the properties.

Patrick Smith lives in the Tremont Street home, while Melvin Gordon uses the property at 801 Church Street for storage. Both have expressed interest in keeping the properties, which set off a mini-negotiating war between them and Rivertown.

Smith’s family has lived in the Tremont home for more than 25 years, staying there after the city took over ownership about five years ago. The current rent paid to the city is $150 a month, but city attorney Jimmy Nunn said the tenants are about two and half years behind on payments.

“He said he would have the money no later than Tuesday. Not all the money. He said he was going to pay around $1,000 or $1,500,” Nunn updated the council Wednesday.

Smith has offered to buy 900 Tremont Street and surrounding vacant properties for up to $17,500 but has asked if he could make monthly payments of $300.

Nunn advised the council that the city can’t legally hold a mortgage for someone but could approve a kind of lease to own contract.

“There are creative ways of doing it if you wanted to do it,” Nunn said. “Rent the property and you will lease it for three years, four years, and at the completion of the lease, you will transfer it over to them.”

Rivertown has offered to pay cash and closing costs for the Old Town properties, according to their proposed purchase agreement.

Both Patrick Smith, Gordon, Jewell Williamson and Sylvia Smith have addressed the council repeatedly over the past three months.

The issue was initially tabled, and the council asked the four parties to see if they could come up with an agreement.

Williamson told the council that Rivertown is only interested in buying the properties together but that they would agree to sell 900 Tremont to Patrick Smith for the amount he proposed to the council ($10,000) in monthly payments, but an agreement could not be reached.

“We have lived there for 25 years or more. I’m kind of afraid. We are not really interested in continuing to rent, we have rented that house for almost 20 years. We have thousands of dollars in this house,” Patrick Smith told the council earlier this summer. “We are now really looking to become homeowners.”

Jewell Williamson said nobody would be put out of their homes if the sale goes through.

“Why would they want to put him out when he is going to pay rent. They have no intention of doing that,” Jewell Williamson said. “[Sylvia Smith] wants in fairness to him to negotiate the terms to both parties. We would like to see him stay in the home.”

The issue had not been discussed at recent meetings until Wednesday, but some council members were disappointed that an agreement could not be reached between the parties.

“These people have been there over 25 years. If you all vote to put them out, I don’t know where they are going to go. I thought things were going to be worked out among neighbors,” said Councilwoman Angela Benjamin at an earlier council meeting.

Motions to sell the property to Rivertown have failed at least twice this summer. Council members who have voted against a sale said they were concerned about what happens to Patrick Smith’s home and less worried about the other unoccupied lots.

“I think we ought to do everything we possibly can for our citizens. Citizens should come first. I’m listening to who can pay the most and … that’s not a good thing for the citizens,” Councilwoman Benny Ruth Crenshaw said before the second failed motion.

Cecil Williamson said as long as the city owns the lots, there would be no property tax generated, and the city would have to keep the homes insured.

“As long as the city owns it, there is no property tax being paid. We are losing money for the next two to three years. The city doesn’t need to be in the real estate business,” Cecil Willamson said.

Bjelke brought the issue back up during a special called meeting on Wednesday. He said it was time to sell the property.

“I want to the settle this. It looks bad on the city. It sets a bad example. We have buyers that have cash on hand that are ready to buy and rehab the property,” Bjelke said. “The current residents have a very good purchase offer put together for them. It’s a win-win for everyone.”

The sale ultimately passed 4-3 with Bjelke, Bowie, Keith and Cecil Williamson voting in favor. Benjamin and Tucker voted against the sale.

Keith initially voted against the sale but changed her vote after the tie.

The sale still has to be approved in a second reading, which could take place Tuesday.

Benjamin took issue with Bjelke the matter up during a special called meeting.

“It’s very good for you to make the motion at a special called meeting when not everyone is here. Very smart,” Benjamin said.

Crenshaw, Johnson and Randolph were absent from Wednesday’s work session which focused on the St. James Hotel and absentee voting.

Cecil Williamson responded by saying the issue was on the printed agenda for the meeting.