500 backpacks given away at Cops and Kids Day 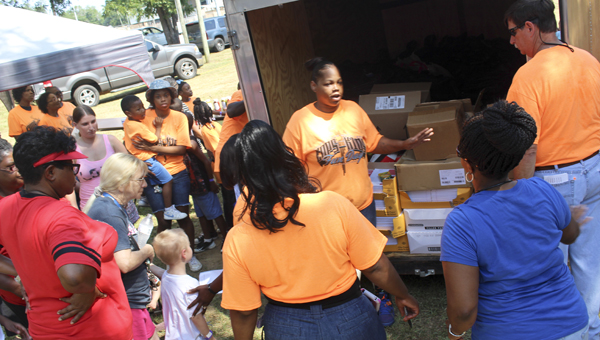 Backpacks and other school supplies are unloaded from a trailer at the seventh annual Cops and Kids Day on Saturday.

The event started at 10 a.m. and by then there was already a long line of families by the Farmers Market at Bloch Park. Students were given a book bag filled with supplies and well as a hot dog lunch and Kona Ice.

“This is our seventh annual year with this program out here, and I think that’s a blessing,” said Lt. Natasha Fowlkes, who organized the event.

The police department had more than 300 book bags to giveaway, while Michael Johnson’s Foundation donated another 200.

“We’ve got a bunch of book bags, and I think we have enough book bags to give everyone one out here,” said Police Chief John Brock.

Brock also thanked Fowlkes for her work in putting the day together. In addition to the school supply giveaway and lunch, there were inflatables for the kids to play on.

“She is the one that put this program on. She is doing an outstanding job the last several years doing this thing,” Brock said. “It’s a lot of work. She is doing stuff at home trying to get this thing set up.”

Brock also thanked local businesses and organizations that donated to Cops and Kids Day. The Selma Fire Department was also helping with the day.

“There are a lot of people behind the scenes that get this thing going ever year,” Brock said.

The police department is also inviting people to come out for its Selma-Night Out, which will be held Aug. 16 at the amphitheater.

Look for more details in a future edition of the Times-Journal.