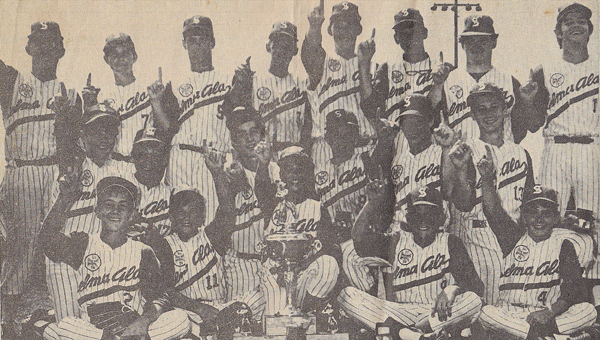 The Selma All-Stars pose for a photo after winning the 1972 World Series. –File Photo

It’s been more than four decades since Selma won the Dixie Boys Baseball World Series in 1972, but many of the players on that team remember it like it was yesterday.

However, it seems nobody seems to remember it better than Pete Williamson, who managed the Selma team that year. Williamson can tell you every score, every opponent and just about named the entire starting lineup from Selma’s team that year without looking it up.

“That was a good group and they worked hard,” Williamson said. “They just willed themselves. They were fine young men and really, really, really worked. Teams there were probably better than we were but they just worked real hard and we had excellent fan support too.”

Selma hosted the World Series that year, meaning the team automatically qualified for the championship tournament. Williamson said playing at home meant a great deal to the team.

“I don’t even know if we would’ve made it through the state or not, but when you sleep in your own bed and eat your momma’s cooking that’s better than being on the road and having to eat out,” Williamson said.

The team was undefeated in the World Series before losing to Florida 3-2 on the series’ final day. With the championship on the line, Selma responded with a dominant 12-2 win over Florida to win the title.

“There’s been a lot of good ball teams that have come through Selma and I think that might’ve been [one of] the first World Series that Selma won,” said Steve Smitherman, who played second base on the 1972 Selma team.

The entire team signed several baseballs that year to commemorate the accomplishment. Gail Lovelady, whose brother Eddie Gibbs served as a coach on the team, donated one of the signed baseballs to this year’s Selma World Series team, which begins play in Pineville, Louisiana, on Saturday.

Smitherman said the 1972 team was also given gold Bulova watches that year, but he doesn’t know where his is anymore.

“I’m sure the rest of those guys still have theirs but I lost mine. I was so heartbroken about that,” Smitherman said with a laugh.

Selma defeated Louisiana 4-1, Mississippi 3-0, Georgia 16-6 and Texas 5-3 to get to the championship game.  Hub Maroney, who played shortstop for Selma, said he remembers the entire tournament.

“It’s something you never forget,” said Maroney, who had a key bases clearing triple in the deciding game.

Selma scored 42 runs in six games, but Maroney and Williamson credited pitching as the reason the team was so dominant. The staff was led by Scottie McLaughlin, who had a game in the tournament where he had double-digit strikeouts and flirted with a no-hitter during the series. The details of that game aren’t as easy to round up nearly 50 years later, but Maroney said McLaughin’s performance was one for the ages.

“Not only does he throw a perfect inning, but he walks a guy in the seventh inning and picks him off first base,” Maroney said. “That was their only base runner of the ball game.  He almost had a perfect game.”

The players on the 1972 team were Maroney, McLaughlin, Smitherman, Ronnie Etheredge, Todd Smyly, Guy Allbrook, Nicky Stinson, Mike Harris, Johnny Cooper, Roy Ramsey, Chris Smith, Jeff Carter, Al Henderson, Charlie Grant, Don Yelverton and John Reed. The coaches were Williamson, Gibbs and Tommy Henry. No Dixie Boys team in Selma has won a World Series since that group, and this year’s team is one of few to qualify. The team will keep the baseball Lovelady donated to them in the dugout as motivation.

The Selma All-Stars play their first game Saturday at 1 p.m. against Florida.