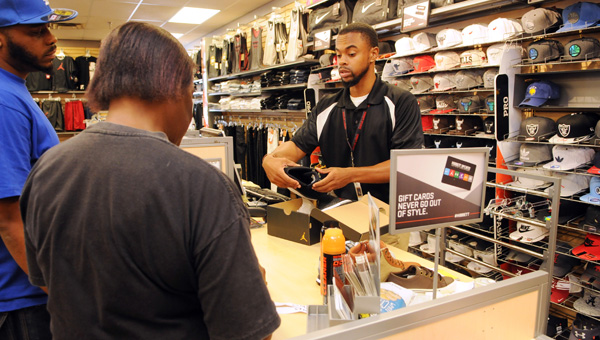 Aubrey Henderson marked off the final item on her back-to-school shopping list for her 10-year-old daughter, Ta’mya, on Friday.

“I would say I’m done,” Henderson said as she took her receipt from the belt kiosk at the Selma Mall. “The last thing I had to buy was a belt for her.”

Henderson said she has planned ahead and has been able to get all her daughter’s clothes and supplies over the past few months.

Henderson said it’s a relief to finish shopping with time to spare. Others, on the other hand, have waited to take advantage of last minute sales, tax breaks and back-to-school drives.

At the Selma office, a line of several hundred people extended down the street. Sanders said within 45 minutes of the doors opening, the Selma office was able to distribute 200 tote bags filled with paper, glue sticks, folders, pens, pencils and other school supplies.

“It was a tremendous and a great turnout today,” Sanders said. “Anything that we can do to help, I think is always a great thing.”

Stores, such as Hibbett Sports, have offered sales on top of the tax-free weekend to boost sales on school supplies.

Kendra Walker, Hibbett Sports manager, said the store has already seen a constant flow of customers during the workweek but expects the crowd to get more intense over the weekend.

Selma and Dallas County are participants in this year’s Alabama Back-to-School Sales Tax Holiday. The holiday began Friday at 12:01 a.m. and will last until midnight on Sunday. Items such as clothing, sports equipment and other school supplies are tax-exempt over the weekend.

Twelve-year-old Ja’kiya Washington and her mother spent all morning getting final uniform items with the benefit of the tax holiday and sales.

“We have two more pairs of shoes to get,” Washington said as she picked up a box of shoes to try on.

On Saturday, organizations throughout town will be hosting the final back-to-school giveaways before the school year starts.

The Selma Police Department will be holding its Back-to-School Festival/Cops and Kids Day at Bloch Park from 10 a.m. until 1 p.m. Supplies will be distributed to children in grades K-12 on a first-come, first served basis.

From 10 a.m. until noon, the Heartland Chapter of Thrivent will host a school supplies drive at the Trinity Lutheran Church, located on Marie Foster Street. Students must be in attendance to receive supplies.