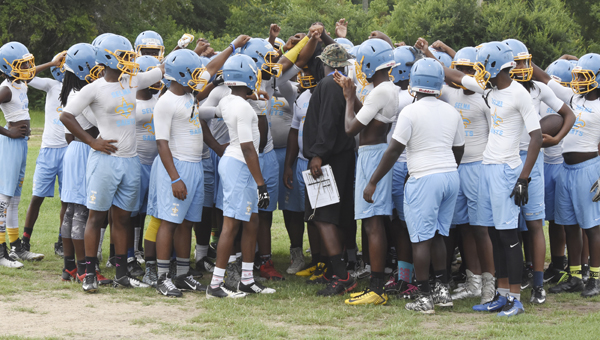 The Selma football teams breaks the huddle before a 7-on-7 game against Sidney Lanier earlier this month at Selma High School. –Daniel Evans

Football season is only weeks away, but at this point of the offseason it’s hard for any team to know exactly where they stand.

On Saturday, Selma head coach Keon Handley hopes to find out more about how his Saints are shaping up. Selma will host an intrasquad scrimmage Saturday at 9 a.m. on the school’s practice field.

“It gives us a chance to see where we are,” Handley said. “It’ll be the first time there’s no quick whistle, full form tackle. It lets us know what we need to work on and gives us an opportunity to evaluate players.”

Handley said the community is invited to attend the blue/gold game and admission is free. The teams will be mixed with first and second stringers. Handley said players won’t know what team they are on until right before the game on Saturday.

“We are pushing the community to come out and see the new team, the new vision,” Handley said. “We are creating some excitement.”

The game will include referees and chain crews because Handley wants it to be as close to a real game as possible.

The scrimmage won’t include live special teams but will be live on offense and defense.

“It puts coaches in a position to get them used to game scenarios where we’ve got to step back and let the players play,” Handley said.

Selma is in the midst of a transition to a spread offense.

Last week, the Saints hosted a 7-on-7 against Sidney Lanier.

“It gives us a chance to intermingle with the community, let them see the new vision and let people like me, who haven’t met the youth league coaches of the area, meet some of those guys and get out and shake some hands,” Handley said.

Selma’s first game of the year is against Southside Aug. 26 at Memorial Stadium.