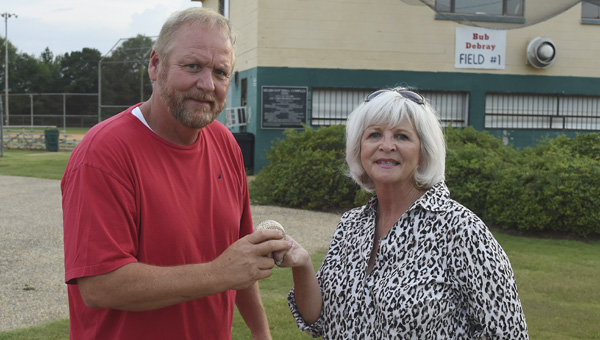 The Selma baseball team will have a special piece of memorabilia in the dugout as the team plays for a World Series championship.

Gail Lovelady presented the team with a baseball signed by the 1972 World Series team before Wednesday night’s practice. Lovelady’s brother, Eddie Gibbs, coached that team, and she found the baseball a little over a year ago.

Up until a few weeks ago, she didn’t know what to do with the ball. She was going to donate it to the city for display at Memorial Stadium, but when she heard about this year’s team reaching the World Series, she decided to give it to the team as motivation.

“This ball needed a home and I hope it motivates them,” Lovelady said. “I hope they go and have a good time and show the world what Selma is made of.”

“It’s very special. You feel like the whole community is behind you, from the city council to the mayor,” said head coach Ricky Waters. “These guys are becoming little hometown heroes.”

Waters said the ball will be prominently displayed in the dugout during this week’s World Series in Pineville, Louisiana. Selma’s first game is against Florida at 1 p.m.

“We will put it in the dugout and may touch it every time we go to bat or something like that,” Waters said. “We will use it as some kind of sentimental value, and hopefully it’s the lucky ball.”

Earlier in the day Wednesday, the team was presented with a special banner to sign by the Selma City Council and Mayor George Evans.

Selma is taking part in the World Series after Enterprise dropped out of the tournament last week. Enterprise defeated Selma in two games in Dothan to win the Alabama Dixie Boys Baseball State Championship.