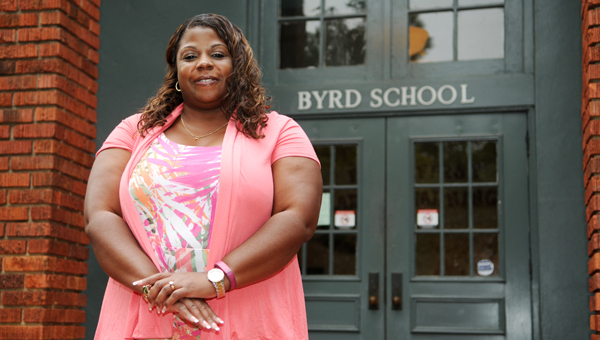 “Read about it, heard about it but I have never actually been to the city,” Brown said of her prior experiences. “I have loved every minute of it.”

Brown moved to town in July and has spent a few weeks learning the ropes and roads before classes resume next week.

On Tuesday, Brown and other Byrd staff members spent the afternoon moving and assembling classroom furniture. The work was a team effort and allowed teachers to get more familiar with their new leader.

“Even though those rooms belonged to three teachers, the whole faculty stepped in,” Brown said. “It was just a team effort, and I just loved that experience.”

She is also a member of Alpha Kappa Alpha Sorority, Inc. and St. Bartley Primitive Baptist Church in Huntsville.

Brown has been an educator for almost 20 years and has spent a majority of that in Huntsville.

She has taught middle school for 15 years, high school for two to three years and college level students for a dozen years.

Although her teaching career has focused on older students, she is looking forward to working with younger children.

She believes her years teaching young adults will help her assist children as they progress through their education.

“Now I get them at the beginning, and now I get to lay that foundation,” Brown said. “I get to set those wheels in motion for how education should go for them the rest of the years. I am very excited about that.”