Stop the Violence rally on bridge 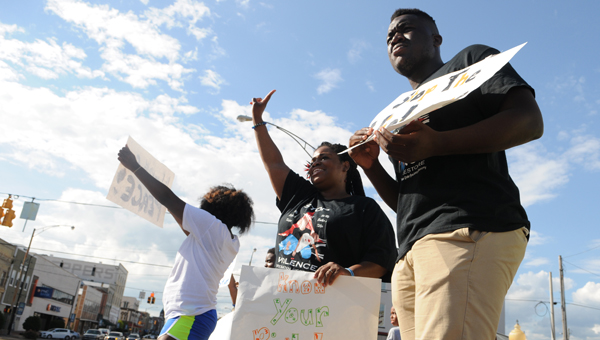 A Selma Center for Nonviolence, Truth and Reconciliation executive director Ainka Jackson (center) stands with Amber Strong (left) and Oluwadamilola Animushaun (right) at the foot of the Edmund Pettus Bridge on Friday during a Stop the Violence rally.

Like a game of Marco Polo, each chant of “honk for peace” was immediately followed by a series of honks at the foot of the Edmund Pettus Bridge on Friday.

The Selma Center of Nonviolence, Truth and Reconciliation’s Connie Tucker Social Justice interns organized and held a Stop the Violence rally as one of their final projects for their internship.

“One of the things they thought was important to do was have a rally to bring awareness to the violence in this community,” said executive director Ainka Jackson.

Over the past few weeks, a group of 10 interns worked to learn about social justice, peace and to assess the concerns within the local communities.

This is the first year of the social justice internship and Jackson hopes next year’s group of interns will be able to develop programs based off the information gathered from the assessments this year to help better the community.

“It’s not enough to tell people to just not be violent; you have to replace that with something,” Jackson said. “You have to give people something to do, you can’t just tell them not to do things.”

Intern Oluwadamilola Animashaun, 20, said he traveled from Providence, Rhode Island, to learn certain skills that he could take back home to utilize in making a change for his community.

Other interns didn’t travel so far such as Marissa Moore, a 20-year-old native of Selma who now studies at Alabama A&M.

“There’s always some kind of crime going on. My home has been broken into like three times. I want to give them something better to do with their time instead or crime of violence.”

During Friday’s rally, the interns and supporters held up posters, sang songs, passed out peace bracelets and also had a stack of voter registration forms to help get those passing by registered to vote if they haven’t already.

The interns will conclude their internship on Sunday with a closing ceremony at the Selma Center of Nonviolence, Trust and Reconciliation, located at 8 Mulberry Road at 1:30 p.m. The interns will demonstrate the work they have accomplished over the past five weeks.

“It’s been a great experience to see young people who have a light within them and concerns,” Jackson said. “And [for the interns to] become very passionate about the issues that affect their community and be equipped with knowledge and skills to do something about it.”