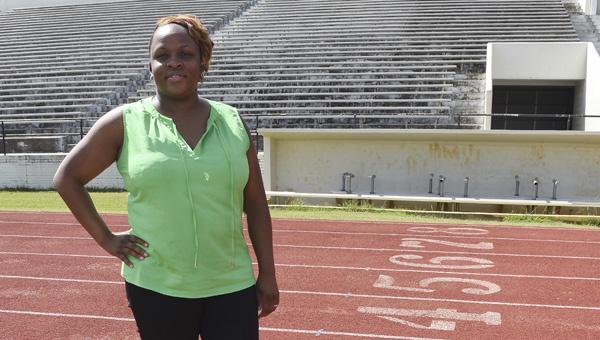 Carneetie Ellison, interim director of the Selma Parks and Recreation Department, poses for a photo Thursday at Memorial Stadium.

Carneetie Ellison’s career is a reminder that hard work pays off.

Ellison has climbed her way up the ladder, from an intern working in the city’s tax and licensing department to interim recreation director, a position she was pointed to Tuesday. She’ll officially take over the position Aug. 8, after Lebo Jones officially steps out of the role.

“I’m blessed and I’m just grateful. The best part about it is I’ve worked my way to the top,” Ellison said.

Following her internship, she was a clerk at city hall and moved to the recreation department in 2005. Last August, she was promoted to administrative assistant. When it was announced as Tuesday’s city council meeting that Jones would be stepping down, Mayor George Evans pointed Ellison to that role.

Ellison said she is the first African American female ever to hold the recreation director position.

As a Selma native, she graduated from Selma High School in 1995 and then attended Wallace Community College Selma and Concordia College Alabama. She earned a bachelor’s degree in business management from Concordia.

She and her husband, Kirk, have been married for two years. The couple has two kids — daughter Kirstin, 15, and son Kirklin, 11.

She admitted that she didn’t grow up a sports fan, but she’s grown to love them through her kids, who both played in the city’s baseball and softball program.

“Once my kids started playing, I’m one of those active moms. I’m at the gate, I’m at the fence. I’m hollering and rooting them on,” Ellison said with a laugh. “But at the same time, if their friends are on the opposite team, I’m rooting them on as well.”

She’s seen the recreation department from just about every position, so she has plenty of experience.

However, she’s still trying to prepare for her new role.

Before this week started, she had no idea that Jones might step down, so she hasn’t had a lot of time to process it all. Once she does, she’ll probably have a checklist of tasks she’d like to get accomplished.

Until then, she said she wants to keep the focus on the children in today’s ever changing world, where technology often keeps children’s attention.

“We’ve had an influx of kids coming and going and that’s due to technology,” Ellison said.

“Kids aren’t as apt to be out hitting the ball or throwing a football because they have too much entertainment at home, but I want to be hands on getting our programs built back up and finding more sports to use facilities and fields a lot more because our fields are awesome.”