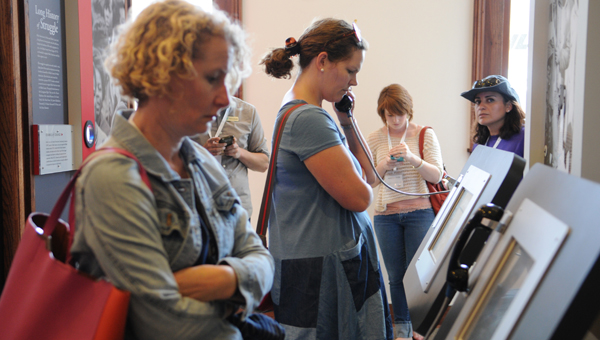 A group attending a National Alliance of Preservation Commissions conference in Mobile visited Selma on Thursday. One of their stops was the Selma Interpretive Center.

At 7 a.m. sharp Thursday morning, a group of about 35 boarded a bus to visit Selma for the first time.

“When we came across the bridge and they saw Selma, I think they were surprised how large it was,” said Mary Mason Shell, Alabama State Historic Preservation Office’s preservation planner. “Google Earth is great, but when you’re physically in the environment, you can understand the stories and what happened a lot better.”

The group was a combination of individuals serving preservation commissions across the country or nationwide nonprofits that support those commissions.

The groups are gathering this week in Mobile for the National Alliance of Preservation Commissions’ biennial FORUM.

From July 27-31, participants will have the opportunity to attend various tours, meetings and seminars to train and learn how to protect local cultural resources.

Shell said a majority of the tours given are local in relation to the conference and the Selma tour is one of the furthest and longest tours available this year. She said the tour also took the group through Hayneville coming into Selma and then through Pleasant Hill on the way out.

“It was just so nice that they were able to come into Selma and that they were so interested in our history,” said Warren Hinson, city of Selma Historic Preservation and Revitalization coordinator.

“They were all oohing and aweing like I knew they would,” Shells said.

To conclude the trip, the group had boxed lunches at the George P. Evans Reception Hall.

Whimberly surprised the group with foot soldiers and others who were involved with the 1965 marches.

“I think they were really, really pleased. All of [the foot soldiers] shared their experiences,” Hinson said. “[The group] had the time to take pictures with the people they’ve heard about, read about and also had a nice tour of our city.”