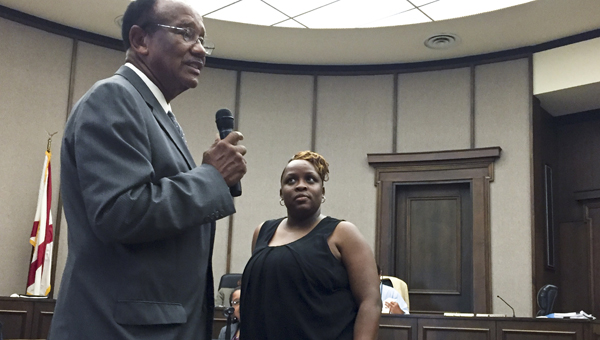 Lebo Jones has stepped down from leading the city of Selma’s Parks and Recreation Department to be a coach and teacher at Meadowview Christian School.

Jones has guided the department as interim director since the untimely death of Elton Reece in March 2015 and before that served as the city’s baseball and softball league director.

“I appreciate the opportunity to work with the city of Selma and appreciate all y’all have done for me, especially the mayor,” Jones said during Tuesday nights’ council meeting. “I’m going back to teaching and coaching high school. That’s where my passion is. I just feel like that’s the right thing for my family right now. I prayed about it for a long time.”

Jones has coached Meadowview Christian’s football team since 2012 and juggled those duties and overseeing the department last season. He told the council he hoped to be still involved with youth programs in the future.

“I still hope I can be involved in the baseball program and help out anyway. I won’t be moving. I will still be in the area,” Jones said.

Jones’ resignation will become effective next week. During Tuesday’s meeting, Selma Mayor George Evans announced that Carneetie Ellison would serve as an interim director. Ellison has more than 13 years of experience with the city, starting as an intern and spending the last decade with the parks and recreation department.

Jones had nothing but good things to say about Ellison and her work in the department.

“I couldn’t have done it without her. We’ve become good friends. I’m happy for her and think she will do a great job,” Jones said.

Ellison thanked the mayor and council for the opportunity and said she was looking forward to getting to work.

“I promise you we will keep moving it forward,” Ellison said.

Applications are currently being taken for the city’s youth football program. Registration continues Monday through Friday during regular business hours at the recreation office and Saturdays from 8:30 a.m. until noon.

Tryouts will begin Aug. 27, and any child not registered by that date will be placed on a waiting list.