Selma to host Lanier in 7-on-7 game Wednesday 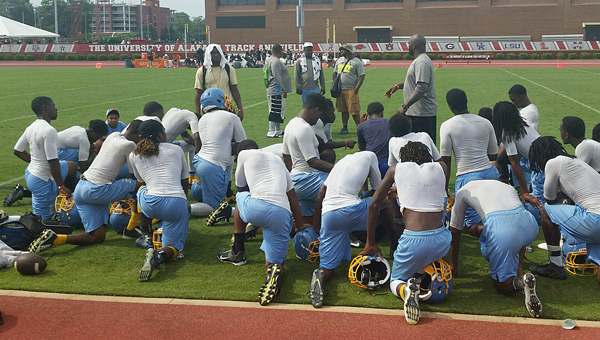 Selma huddles up during a timeout in last week’s 7-on-7 camp at the University of Alabama. –Submitted Photo

First year Selma head football coach Keon Handley will get a chance to see his Saints in action on Wednesday, less than a month before the regular season gets underway.

Selma will host Sidney Lanier at 9 a.m. Wednesday for a 7-on-7 at Selma High School. The teams are also going to do some 11-on-11 drills without pads, Handley said.

Although Handley said he doesn’t put a lot of stock in 7-on-7, he said Selma needs to the extra time to work on its transition to a spread offense.

“For me, transitioning to a spread team, it’s important that I see our guys run routes,” Handley said. “Knowing that Selma has been a traditional I-formation team, these guys didn’t really run a lot of routes. They ran basic combination routes but in the direction I’m trying to go in the program … it does a lot for me in seeing what we need to improve upon.”

Selma is in the midst of a team retreat that started this past weekend. The entire team has been staying at the school as part a weekend meant to build unity.

Selma also participated in a 7-on-7 last week at the University of Alabama. Selma faced off against Clay Chalkville, Stanhope Elmore, Paul Bryant, James Clemens and others.