Longtime Bush Hog president W. Russell Buster Jr. passed away Tuesday, but the impact he had on Selma will live on much longer. 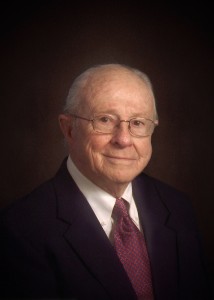 After a stint in the U.S. Air Force during World War II, Buster started his job at Bush Hog in the early 1950s — right after the company had been founded.

Before joining Bush Hog, he had worked at Southland Mower and then Rawls Machine and Supply, where he began experimenting with a design for a heavy-duty rotary mower that eventually became part of the Bush Hog line.

“He was critical in the formative years of Bush Hog,” said James Bearden, who retired from Bush Hog in 2013. “He helped form that company. We went through a great deal of growth under Russell’s leadership. We had plants in Kansas, Texas, California and Illinois and Russell was very instrumental in growing the business through expansion and other plants.”

Buster became president of Bush Hog in the 1980s and held that position until he retired in 1993 at age 70. According to an archived Times-Journal story, Bush Hog eliminated assigned parking spaces during his time as president.

“If someone beats to my space, that’s fine. The point is everybody is important and makes a difference here,” Buster said at the time.

Friends and family said that’s just the kind of guy he was — everybody in the building was treated the same, whether they were managers or hourly employees.

“Even years after he left, people on the shop floor still asked about Russell and how he was doing,” Bearden said.

Former Dallas County Probate Judge Johnny Jones, one of Buster’s longtime friends, said he was a straight shooter, meaning whatever he said he meant.

“People liked him and respected him,” said Harold Speir, another lifelong friend. “They respected him because of his word. What he said, he would do.”

Buster was a 1941 graduate of Parrish High School and attended Auburn University before World War II. He served in the Air Force in 1943 and spent time in England, France and Germany.

Once he returned to Selma, he not only made a difference at Bush Hog, but in the community as well.

He served on the executive committee of the Paul Grist YMCA, the board of directors of Peoples Bank and Trust Company, director of West Central Alabama Rehabilitation Center and president of the Southern Farm Equipment Manufacturing Association.

He was also a member of First Baptist Church of Selma.

“He was very much interested in what Bush Hog needed to do in the community also,” Bearden said.

Jones said he and Buster would spend a lot of their free time hunting and fishing together.

“He was a real outdoorsman. He loved to shoot dove, that was one of his big things,” Jones said. “He would plan and prepare for the boys and family to hunt and he would enjoy that as much as actually hunting himself. I remember going on dove shoots with him and he’d just as soon sit and talk with you as he would go out and shoot dove.”

Buster, 93, passed away after a short illness at Park Place Nursing and Rehabilitation Center. He is survived by Betty, his wife of 67 years, his sister Virginia, son Rusty, and daughter in law Bonnie.

A memorial service will be held at First Baptist Church Thursday at 1 p.m.