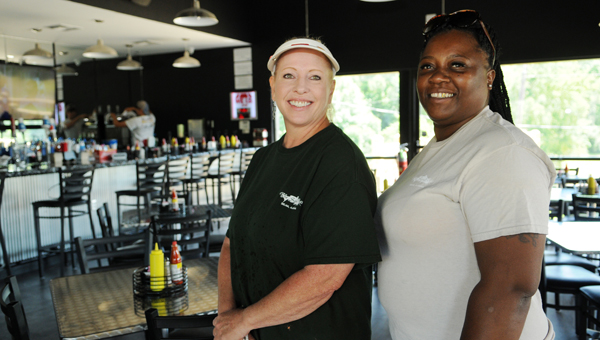 Kim Morris, manager, and Trina Brown, kitchen manager, pose for a photo at The Sand Bar restaurant Monday. The restaurant had a soft opening on Saturday and will be officially open for business Wednesday.

After being closed for seven months from flood damage, The Sand Bar restaurant is making a return and it’s bigger and better than ever.

The restaurant will reopen its doors for lunch and dinner beginning this Wednesday at 11 a.m. It closed in late December after experiencing severe flooding after a string of heavy storms. Water levels reached to a staggering level, nearly completely engulfing the old structure underwater.

“We will never, ever have to worry about flooding again. If we flood, all of Selma is going to be underwater,” said Kim Morris, restaurant manager. “I knew that when we got back that we were going to be better than before.”

The restaurant is now housed in a 1,600 square foot structure that is elevated roughly 14 feet off the ground. In addition to being built on stilts, the building was constructed on higher ground – the parking lot up hill from the old building.

“I look around this place and I am so proud of what we have here. It’s like nothing else in Selma,” Morris said.

The restaurant has seen many upgrades including a new bar, equipment, more draft beers and larger dining areas all while maintaining a cozy environment.

On Saturday, the restaurant had a soft opening to test out the waters before officially reopening on Wednesday.

The soft opening began at 11 a.m. on Saturday and remained packed until 2 a.m. Sunday morning.

She said anyone who came to event heard about it through word-of-mouth.

“It was a lot of fun. We asked to be busy and we got our wish,” Morris said. “We were at full capacity all day and all night.”

The restaurant will have its grand opening on Sept. 5 in conjunction with the second annual Alabama River Raft Race.

Morris said some things people can look forward to is a full menu, complete with all the menu items that were removed last fall, and extended hours.

Morris said the staff has been in the restaurant the past week getting ready for its regular hours. During that time, people have been constantly stopping by in anticipation to see when it’s open.

“We are just tickled over the response,” Morris said about the attention from the public. “Everybody loves this place.”