Digging up dirt at Old Cahawba 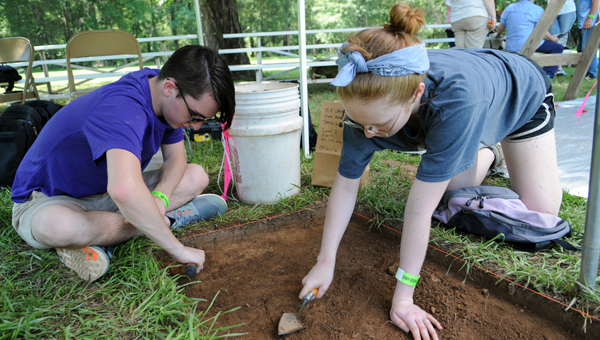 Will Griffies and Charlcie Hathorn dig at Old Cahawba.

“It has to be precise because you have to know where it’s coming from. You can’t just dig a hole,” Hathorn said about locating and documenting artifacts as she continued to carefully scrape the dirt.

Thursday was the first day of the Public Archaeology Days at Old Cahawba, hosted by the Alabama Historical Commission and University of Alabama’s Office of Archaeological Research.

“I think this is awesome. I think everybody should be out here because we are on the verge of a historic discovery,” said Linda Derry, Old Cahawba site director. “It will be the first time anyone has seen part of the State House since 1833.”

The excavations will be available to the public Friday and Saturday from 10 a.m. until 4 p.m.

For those who are interested, the morning will begin with tours of Old Cahawba beginning at 10 a.m., priced at $8 per person. Later in the afternoon, the excavation will be paused from noon – 1:30 p.m. for lunch and lecture.

Lunch was provided on Thursday for pre-registered participants and was sponsored by the Selma-Dallas County Chamber of Commerce. Lunch will also be provided on Saturday for those who pre-register.

“Our main focus for this [excavation] is locating walls from the State House,” said Dr. Virgil Beasley, University of Alabama archaeologist. “It’s not certain where the state house stood; it’s on this lot, we just don’t know where exactly.”

Derry said the building collapsed in 1833 because of poorly made bricks that dissolved after some minor flooding around the building. All of the building’s documents and other contents succumbed to the collapse.

Derry said other than what is buried beneath the dirt, there is no true visual indication of what the building may have looked like.

“The State House collapsed in 1833 and no one has seen it since then,” Derry said. “People think they see these images of it, but no one who drew it actually saw it.”

Some artifacts recovered so far include pieces of glass and pottery, nails and other evidence.

Beasley said the excavation is part of an overall project to survey the entire town.

So far, the crew has worked to locate wells, chimneys, bricks or other indication of structures as well as conducing surveys underground using ground-penetrating radar. With the radar, they have been able to find a moat and are working to locate unmarked graves.

Other than seeing history first hand, Beasley said the three day public excavation is a good way for people to learn first hand on how archaeologists work and to be a part of a professional dig.

“You might be part of something really amazing,” Derry said.

For more information about the event or to register, visit Old Cahawba’s page on Facebook.