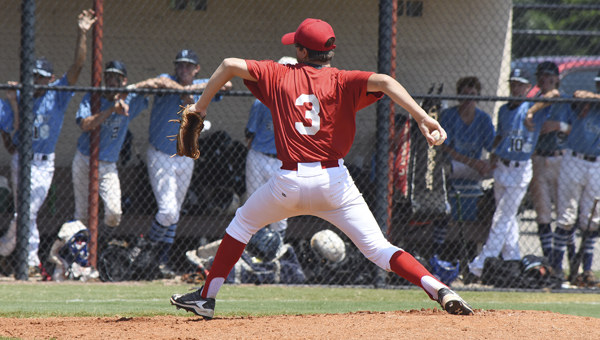 Selma went into game two of Wednesday’s Dixie Boys State Baseball Championship needing a spark. Nothing went right in game one, which was played Wednesday morning, and something needed to turn the tide.

Jeremy Lee appeared to do that right from the start, as he launched a home run over the center field wall at West Gate Park in Dothan to give Selma a 1-0 lead. By the time the top of the first inning was over, Selma was up 3-0 and the players in the dugout were dancing on the fence in excitement.

“I was thinking we’ve got it all the way,” Lee said. “It was a spark plug. Everybody got fired up and I thought that was going to be it.”

At least, that’s the way the game was supposed to play out. Instead, Enterprise matched Selma with its own three run inning and took the lead for good in the second inning.

It was that kind of day for Selma.

Enterprise had to beat Selma twice to win the championship Wednesday and managed to do just that, winning game one 12-3 and game two 18-8. Enterprise won the tournament for the second year in a row and will play in Pineville, Louisiana in the Dixie Baseball World Series.

Selma entered the day undefeated and needed only one win against an Enterprise team it had already defeated during the tournament. A win would’ve given the city of Selma its first Dixie Baseball Championship of any kind since 1981.

“They had a good run at it, but we just didn’t finish the job,” said Selma coach Ricky Waters.

Selma actually led in both games, although it was briefly.

In game one, Alex Colquitt singled to score Xavier Green to give Selma a quick 1-0 lead, but everything that could go wrong seemed to from that point.

Even before Green scored, Milam Turner had been thrown out at home after an incredible throw by Enterprise’s Lance Levine, who caught Lee’s fly ball in centerfield and still managed to throw out Turner at the plate.

Later in the first inning, Amarian Molette was thrown out stealing home. On that play, Enterprise starting pitcher Clayton Dunn managed to jump over Molette and still apply the tag.

“He thought he could make it and that is a judgment call for a runner,” Waters said.

Just like that a lead that could’ve easily been 3-0 was still stuck at one.

In the second inning, Selma managed to get Joseph Estes and T’Darrious Olds on base with no outs and forced Enterprise to pull Dunn from the game.

With Ethan Stinson in to pitch, A.D. Tate bunted to move the runners to second and third, but Estes was thrown out at third on the play.

It didn’t get any better from there. Octavious Palmer and Lee followed by grounding out to end the inning, leaving three runners stranded.

Enterprise took the lead for good in the third inning on a 2-RBI single by Drew Williams. Enterprise ended up scoring seven runs in the inning, including a 2-run home run by Colin Marsh.

Selma’s deficit had grown to 9-1 before two runs scored on a ground out by Alex Colquitt. Dunn homered in the top of the sixth to extend Enterprise’s lead to nine and to eliminate any thoughts of a Selma comeback.

“It was mainly errors. A lot of people made errors,” said Selma infielder Joseph Estes. “Our bats weren’t that bad but people were watching curveballs and lunging at them and taking fastballs.”

Game two was much of the same — a Selma lead early, but Enterprise in command most of the way.

Estes singled to center field to score Green and Colquitt to give Selma its biggest lead of the day.

Enterprise erupted for six runs in the bottom of the second inning.

A double by Levine gave Enterprise an 8-7 lead and the team tacked on one more run on a single by Dylan Dalrymple.

With temperatures in the high 90s and pitching limits forcing both teams deep into their rotation, it seemed as if the stage was set for a shootout. Instead, both teams settled down and neither team scored again until the bottom of the fifth inning.

Enterprise was the next team to score, tacking on three runs in the fifth to take a 12-7 lead.

Selma had its best chance to score in the top of the sixth inning. Lee doubled to begin the inning and after Molette walked, Selma had two on and only one out.

Selma had to settle for only one run as Enterprise’s Marsh pitched out of the jam.

In the bottom of the sixth inning, Marsh hit a home run to spark a five run inning that ended the game. The 10-run rule was enforced at that point.

“Coming in here, we didn’t think we were going to do as good as we did, but we just stuck together and played through it,” Estes said.

“The hard work paid off but I wish it paid a little more.”